Ahhh, summertime in the Great Lakes region. Fingers crossed it's going to actually arrive at a decent time this year and actually stick around for a bit (last summer 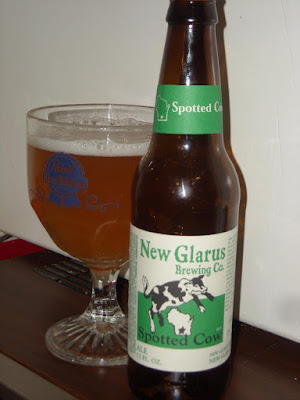 was the biggest let down of a summer that I can even recall). Important things to enjoy the weather in this region during the then are beaches, bar-b-ques and of course beers. Finding a brew that is light and refreshing but still packed with flavor can be a tricky proposition at times. Spotted Cow is one of those kinda brews that fits the bill BUT is even trickier to find because they don't sell it outside of Wisconsin state lines. Luckily though, us here in Michigan based Smashin' Transistors have plenty of friends that live in the land of where the actual happy cows live (Pfft to those Cali poser cows) and Curly Lambeau so we're able to get a fix of them from time to time.
Bottle conditioned cloudy gold in color with a half inch head that melts fairly quickly but leaves a rim and a slight cap all the way through as well as a spotty lace. The scent is clean, all about a mild summerlike zest and slightly bready. The upfront flavors are similar to that of a Bell's Oberon with it's lemon peel and orange juice nuances but Spotted Cow definitely has it's own thing going on because of it's farmhouse ale leanings instead of a straight on summer wheat stylings. As it warms in the glass sweet cream characteristics come out more. The bubbly yet smoothness of it finishes with something tingly on the palate but not sticky.
This is the last bottle of have I have of this for the time being. I had to split it with my wife because I told her a month or so ago that there were none left and when she saw me pouring it she snagged the glass from me. Good thing we have a friend from Wisconsin visiting in a week or so from now. It's been made mandatory that he brings some of this (as well as some other of the brews New Glarus makes) with him.
http://www.newglarusbrewing.com/
Posted by Dale Merrill No comments:

Jordan B. Davis at the Raven Cafe in Port Huron 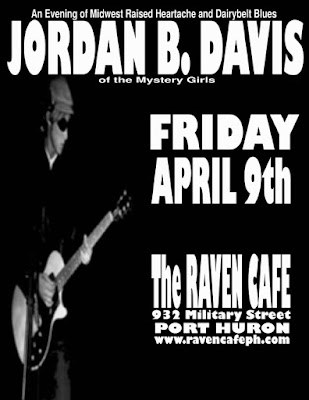 Jordan started making a racket while still in junior high school. One of the band he formed with some friend's were known as those noisy, blues, stoner punks from Green Bay, Wi-the Mystery Girls. They had a good run releasing albums for Trickknee and In The Red as well as a handful of singles on labels such as Cass and Bancroft. On Friday, April 9th at the Raven Cafe on in downtown Port Huron, Michigan he'll be showing his more Big Star/Gram Parsons singer/songwriter side with an acoustic performance. The plan is to turn the place into a hootenanny if only for one evening. It's all ages and no admission. Good drinks, decent eats and free Wi-Fi. What more could you ask for on an early Midwestern spring evening?
Check out some of Jordan's latest music here.
Posted by Dale Merrill No comments:

Though Dan Kroha was one third of one of the greatest rock-n-roll bands ever, The Gories, his contribution to the racket they made sometimes gets overlooked. Mick

may have been the soul of the band but Danny the heart with the guitar blaaang and his "My voice still hasn't quite changed yet" scream & shout. With this, his latest combo, takes the proverbial bull by the horns with a straight up & stripped down rock-n-roll sound.
The band get's their best "Electric Warrior" Bolan if he wandered the cracked pavement streets of Detroit and had a serious "Coney Island Baby" eral Lou Reed jones boogie on with "Mink Dagger" (she got that sexy swagger that keeps all the boys in line). Full of glitter rock 'tude and serpentine string bending this gets you up and swaying like the way the Hollywood Brats "Tumble With Me" does. The only thing missing is "Woo-Oohs" in a chorus but Danny throws enough WOO! & YEAH! in it that you won't even notice any types of missing garnishments. It's a total groover that get's y'all geared up and loose limbed.
Now that any tense muscles have been shook a little loose with side one flip the record over and be prepared to kick a little ass or get your ass kicked in the process. "Medicine Cabinet" is the kinda of song the the Stooges faithful still wish Mr. Osterberg to do since "Raw Power". A loud, fast and blasting ROCK AND ROLLER sound that will never go out of style no matter how many rawk bands make it so boring. Dan Kroha knows without the attack the pose means nothing. I keep flipping this over and turning up it louder. YEAH!
http://www.cassrecords.com
Posted by Dale Merrill No comments:

Let's see now...A hayseed who looks like he should be working at the grain elevator/feed store banging on a Telecaster with such might his spirit makes

up for any going out of tune the guitar may and probably will do. To his side a guy who looks like Ernie from Sesame Street's pervy older brother thumping on a bass that is almost as long as he is tall. Behind them both a hippie looking drummer who doesn't like to keep his shirt on for too long (but, yeah, that is a common trait for both hippies and drummers) bashes away doing his best to keep some order of timing.
To call this dork/nerd/reject rock is selling it short. Sure, it IS all those above but it's not like you're listening to the next Dead Milkmen or They Might Be Giants (though I have little doubt that's what they strive to be on more than just a rare occasion). You're not gonna find many kid friendly or 80's mall nostalgia sounds going on here. Instead it's short but not so sweet Crucifucks inspired/Garage-Punk induced geek freak outs about loser jobs, Dead Kennedys as interpreted by closed head injury patients spazz moments about jerks & bad people and other disturbed moments that some might imagine what Flipper would sound like if they did Cramps covers.
On stage their comic book store dwelling humor and put down between song banter can (and usually does) go on longer than the tunes themselves. It's like they thrive on bringing the hecklers out and, in the end, get the best of them. Obviously, listening to Crappy Dracula isn't going to make you smart or cool (but if you're punk rock why would you care about such things anyway?)
http://crappydracula.com/
Posted by Dale Merrill No comments:

From what the handwritten note that came with this record and what to be gleaned from the internet if South Carolina's Charlie McAlister is nothing else he sure is prolific. He's released gobs of cassettes & records

(according to the note over 70) but outside of whatever little world he gravitates in not much has been heard.
"Beachball Boogie" which answers the question "What if someone maintaining a meth lab next to a square dance hall". Charlie shout his words like they're over caffeinated dance step calls while wound too tight do-si-do music eggs him on. "I'm Freezing" is next sounding like the local banjo player discovered the aforementioned meth lab and Devo in the same week.
Side two starts with a shave & a haircut two bits old timey sounding bounce along til you realize the guy is telling a story about a lady who did him wrong in a really bitchy way. To these ears at first it was thought the accompaniment to the guitar, voice and rat-ta-tat drumbeat that is all over this record was a horn of some type. A trumpet perhaps but on closer listening realized it was something closer to one of those plastic organs that were big in the Sears Wish Book for a couple decades. You know the ones I'm talking about. The ones with the brown plastic woodgrain and when you plugged them in the fan & wind that powered the sound was louder than the sound itself most of the time. The record closes with the Ben Wallers if he lived in the Carolinas, was in a good mood most and had a back porch to sit on and watch the sun go down every night "Memories In The Rain".
http://www.zen-grafix.com/charliemcalister/
Posted by Dale Merrill No comments: