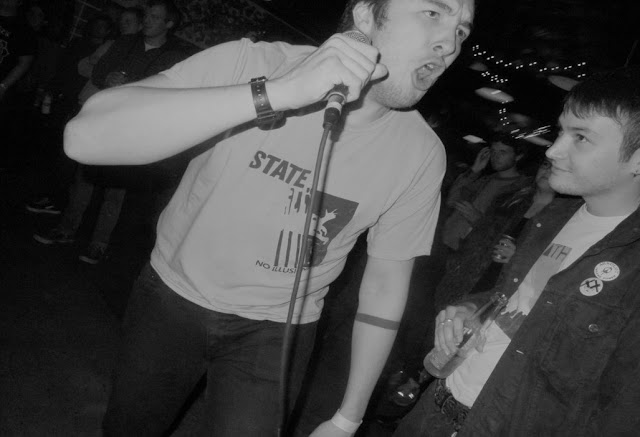 Calling Virginia band Fried Egg straight up traditional USHC is a target anyone who has heard this new record or their debut flexi single from last year can hit.
The thing is though is that such a target is a little off the mark when it comes to being the complete bullseye. Sure, it's got chunka-grrrrr/dentist drill guitar riffs and a raw throated bellower ranting on the mic but that's just the jump off point for the band to dive into things a bit more askew and scorch the pages of rule book rote. A bare knuckled rock-n-roll blast jettisons "Mixed Feelings" a land of whirling rage while "Second Fiddle" lumbers like the Meatmen with less winking nods to to heavy metal stunts and bigger love for the sound of broken glass in a garbage disposal.
After those three minutes are done the band is ready hit an opus point with the b-side.  Clocking in a time almost as long as the first two songs combined, "Eggshells" runs through a gauntlet made circular saws and sticks of dynamite, flipping the bird and hacking mucus all the way through.
negativejazz.bigcartel.com
Posted by Dale Merrill No comments:

Since the mid-90's I have seen every band that James Arthur has been in that rolled through Michigan. The first couple of times it was just coincidental. Then it came deliberate. Fireworks. A Feast Of Snakes. The Necessary Evils. Heck, even when he was in the Golden Boys. I was always around whooping it up at the show and then talking bourbon, bikes, backwoods and whatever else afterwards.
Since the 2010's Manhunt LP on Melbourne's Aarght! and a couple of singles though the world hadn't heard much from James. He had his reasons to go missing (you can read all about that and more in an interview he did with Ryan Leach) but now, along Orville of the OBN IIIs on drums, Golden Boys Bryan Schmitz and bassist Sean Morales, he's back to plugging things in and making noise on them.
Like those previous records with the Manhunt name on them, there is an ambient and soundtracky vibe on tracks like on Psilocybin mushroom heaped spaghetti westerns "Blowout" and "Butcher" but Digital Clubbing isn't just a bunch of mood pieces strung together with the more meandering parts clipped out.
"Blackbird" and "Come Down" take Davie Allan & the Arrows fuzz down some dangerous paths. The former into a burning building full of hoarse rhythm and blues growlers, the latter tying it to the from of a truck hauling dynamite and aiming straight for a brick wall. Beating the tar out of things beyond recognition might be a thing that runs through the record though as "Wired" has a riff that boogies like a, what else, totally wired classic rock station being spun out of control and then belt sanded down to a chunky pulp and by the time "Kill Zone" finishes, a dizzying space rock high still rings even though all that is left behind is ashes.
12xu.net
Posted by Dale Merrill No comments:

Because of calling Memphis home and they're records have bee released on Goner,  Nots often get the "garage punk" blanket through on them. The thing is though they don't sound like anything from Back From The Grave nor much like any contemporaries they'd get bracketed in with that comes with the tag. If there's was anything that a listener would associate with the blues on a Nots record it would be more about the band's aural darkness than something that might be heard in your average backyard on a Saturday while some cuts into a roasted pig.
If anything, the band is much more closer to the late 70's jittery UK  DIY art-conk than what usually flows down through the Mississippi. The differences though where that stuff acted a bit demure and hoity-toity about its agitation, Nots don't mince words. They use guitars as serrated knifes to make jagged patterns and searing synths to then cauterized the wounds. Instead of offering something for the pain, drums beats rattling as the only distraction for the brain while a chorus of bawls and wails jeer.
"Cold Line" takes the listener to a dark and damp place. It's a dampness that is not of the cold, clammy sort the we've been told in fables that the English deal with though. The goth here is of the southern type. Slathered in humid echo the song sounds as if it recorded in some graveyard where dorky psychobilly zombies get made into dust after passing through a 5 story tall grater.
Covering a song that any self-respecting maven of weirdo music considers definitive and a touchstone for a whole form usually leads to a lot of derision. "HOW COULD THEY DO THAT?" I don't know how many times now I've heard a band do a take on "T.V.O.D."  and no matter how sincere and serious that band may have been about doing it justice, it's usually sounds like a cornball tribute or something else simply unconvincing. Somehow though when the Nots do it though it really seems like they've have been sucked in by the video addiction and are using an IV that's hooked up to cable television feed.
www.goner-records.com
Posted by Dale Merrill No comments: 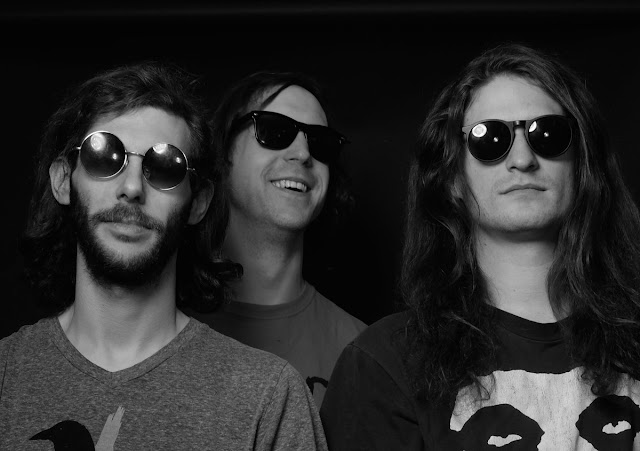 Trebly guitar that sounds like rubbers stretched over the top of a metal trash can and cranked through a 20 watt Gorilla amp. Vocals verge on puberty croaking pleas at 7am on some songs, like their take on the Country Teasers "Golden Apples" which sounds like some adolescent boys trying to gross out some girls behind the garage by making snot bubble and talking about getting warts from toad piss. On others, like the remedial class Black Sabbath fuzz stumbler "On The Wire" and the spasmodic blues riffed "Sevens" they're more like heavily medicated pro-wrestler on.
Throw in a drummer that knows two beats (actually just one but it can be played fast or slow) and NYC's Sexy Neighbors probably have more people casting away their eyes than checking out any foxiness they may have been told they have. I think they would have it no other way.
www.facebook.com/sexyneighbors
Posted by Dale Merrill No comments: