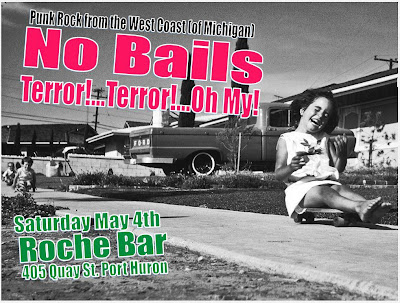 Kalamazoo's mighty No Bails are bringing their groovin' sludge to the Roche Bar on Saturday May 4th. Powered by cheap pizza, cheaper beer, punk rock records of the Aussie kind (think Cosmic Psychos, feedtime and et cetera) and getting the wrong impression from ABC After School Specials-this trio will rumble your guts.
Along for the ride from the land of Bell's beer and Broncos are the wild, wiggly and woozy hyperactivity that is Terror!...Terror!...Oh My!

Check out a tune from No Bails here.
Get an earful of Terror!...Terror!...Oh My by clicking here.

Yours truly along with some special guests will most likely be spinning tunes before between and after the bands too.

Spongy! That's it.
Weird squishy things soaking up weird squishy things.Things that give a person bad dreams. The kind of thing people wish don't swim up by them. Trailed by an ooze that looks used motor oil. With clumps of hair and cucumber peels floating in.

Wobbly too! Very wobbly. The squishiness brings on a seasick feeling. Out of phase guitar line wiggle flanged out scrawls of gurgling lost somewhere between some flick from long ago where they would tell the viewer "Welcome To The Future" and the scene that plays in the head in high school when it is found out that those 4 really weird guys with bacon greased chin and forehead zits, hunched backs and constant large stains on every piece of clothing that the own have a band.
Those old Sci-Fl films were just guessing what robot making music would sound like. It was all analog. The had no idea about midi and the perfect timed mechanical beat. They assumed we'd all be living on Mars. They thought robots would sound like trained monkeys running on car batteries or atomic power. The 4 really weird guys practiced really hard at learning tunes by Rainbow and even though they thought they sounded really spot on-everyone else was wondering if they were intentionally trying to sound like the Residents with sincere but inept rock chops.
Cop City/Chill Pillars sound like the spent a lot of time listening to both of the above along with the band Parcheesi (y'know the band who shipped platinum with "I Didn't Know She Was A Midget" from The Men Who Make The Music. Rob the Man from Big Entertainment said they were hot.) Either that or they're just trying to make world music but it comes out all unworldly. Repetitious chants, blurting saxes, mucous laden synth lines. It may disturb some and make others feel queasy. These Orlando, Fla weirdos wouldn't have it any other way.
www.floridasdying.com
Posted by Dale Merrill No comments:

A few years ago it seemed that most major metropolitan areas have had their own Junior Black Lips. Whether it was intentional or not to cop that sound; stealing beer, puking in the bushes and doing some shambling latchkey kid take on the Pebbles and Back From The Grave canon and sounding like the way the B'Lips seem to become de rigueur. In Vancouver, BC the job has been that of Dead Ghosts. 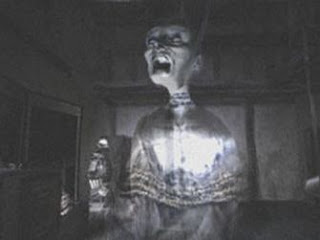 In the more recent past the band has started to cut their own path out of that sound, but these recordings date back 4 and 5 years ago. It sounds as if back in those days a copy of We Did Not Know the Forest Spirit Made the Flowers Grow was ever very far from their stereo (and most likely wasn't).
Drenched is glassy reverb, guitar jangle swimming in cough syrup and nasally singing that sounds agitated from be just woken up are the main calling cards here.
"I Sleep Alone" (recorded summer 2009) sounds like it some folks trying to get a gig in some total small town dive country & western bar. On of those dive country bars where Happy Hour starts at the 7am opening time so all the old guys who were out fishing hours earlier and the 3rd shifters just getting out of work can go get sloshed before sleeping a good part of the afternoon away. The selections of import beer consists of Labatt Blue and maybe Guinness but no one ever drinks them because they cost an extra 50 cents. It's the only place in town the band hasn't played so they haven't been unplugged and shown the door yet. It may be the band's attempt to work up something that will make the folks think of Porter Wagoner (or some "Damn punk rock kids" trying to sound like the Stones trying to sound like Porter Wagoner but on rattier equipment and way low rent stimulants) but the slurry slide guitar lines just gets those old cranks scowling. When the messed up organ solo towards the end of the song starts the coots yell at them "You are stoned on something beyond bourbon. You are on them hippie drugs" before showing them shotguns and the door.
Flip it over and "Spot A Trend" (from 2008) is all frantic fuzz fueled by unhealthy living and, well, whatever songs the Black Lips taught them how to play. Trashed out live to tape recording that sounds like everything is about to fall apart. Drink too much, bang into people and wait to get thrown out of another party.
http://randyrecords.blogspot.com/
Posted by Dale Merrill No comments: