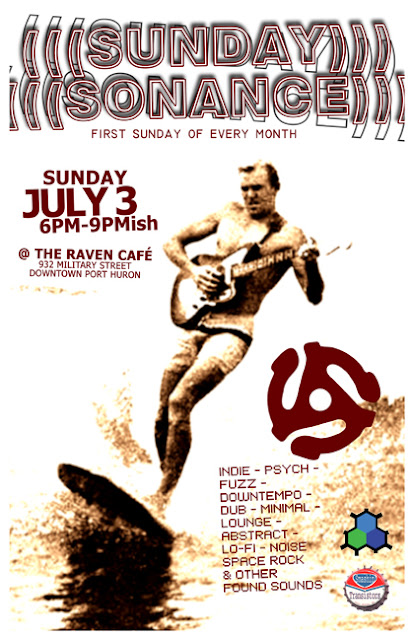 Join Franck and yours truly, Dale, for a night of tunes, drink, eats and conversation. Each July edition happens close to my birthday. This one is two days shy of it. You are welcomed to bring gifts.
http://www.ravencafeph.com/
Posted by Dale Merrill No comments:

Records considered Punk "Fucking" Rock have tend to have some problems though when it still comes to living up to that claim times later. There's many times where records dubbed that sound, well, kinda like a yoke some years down the road (if they weren't donned with the title as one to begin with).
These Austin, Texas gruel mixers have no problem with the former and have no problem with the later either. If this is punk rock of any sort it's the best kind. You know the kind. The bottles flying/girls crying barroom rock-n-roll kind.
Stones swagger. Stooges sickness. Dolls decadence. Dead Boys drunk and disorderly. It's all balled up and thrown into a pot of chicken grease and bad attitude juice here and boiled on high til the entire town smells of it. This isn't the not the macho, thrust the chest out so the can see this is a VINTAGE AC/DC t-shirt, Leather booted on the monitor for the 8th guitar solo in the last 5 minutes RAWK or Heavy Metal Fonzies stuff that you couldn't throw a Les Paul copy without hitting ten of them that overran the landscape a decade or so ago. Four juicy cuts of meat eating, stinking of beer sweat, slob celebrating ROCK-N-ROLL. Play this record SUPER FREAKIN' LOUD and be prepared to have it kick your ass all over the place.
http://www.facebook.com/OBNIIIs
Posted by Dale Merrill 2 comments:

and there it would sit for quite a long time. C'mon, Sepia toned color, old timey Wild West lettering and a dude sporting a sombrero? First impressions would be "Oh, man. Not another jackass cow-punk band."
That's right, not a good cow-punk band (which do happen from time to time) but one of those jack ass ones. And oh, there are so many. Throw in the edges of the sleeve burned for a little more character and it could be another band playing songs about how they want to be smoking weed with the Supersuckers while listening to Hank III and talking about the devil.
"Sorry, man. I doubt ya do it good" and there in that pile the record would sit.
That's not the case here though because this slab is courtesy of Kind Turkey records in Wisconsin. The label is headed up by Bobby of the always loud, always a blast beer drunk garage duo the Hussy. He's a rockin' dude and to my knowledge has never written a song about smoking pot with the Supersuckers while listen to Hank III. I trust his tastes. If he decided these guys were cool enough to put a record out by 'em I know it's gonna garner some listens here at the Chez Transistorsmash.
Once the needle hits the groove here any worries of Trent Fox & the Tenants doing songs about smoking pot with the Supersuckers while listening to Hank III and talking about the devil are quelled. Instead, spry rock-n-roll with one foot planted in a bucket of "Good Times! Great Oldies" goo, the other in a catbox of 90's garage punk mess is the call to (rock) action here.
The Beach Blanket Blowout beat of "Mess Around", a not so cautionary tale of boy telling girl she better behave while he's gone or there will be trouble, kicks this 5 song EP with a hip moving beat, splattery guitar twang, maniacal laughs and more sing along "YEAH! YEAH! YEAH!"'s than I thought was even allowed anymore.
With such a high revved up opener some records drop the energy a bit in the next couple songs but these Wisco-revelers keep it going with the hyped on caffeine and pizza Country-Soul turned up to 12 "Outta Mind" and side closer, the three chorded soon to be party favorite "Jokes".
The songs on side two, "Old Lady" and "Sounds Fine To Me" were recorded 10 months later. They show a little bit of "maturity" in the song writing but it's not like it's comparing the Seger System's Mongrel to ol' grandpa Bob's Fire Inside or something as the band is still spun up and at punch weight. Both tracks remind me of the night at a party when the Deadly Snakes convinced some Black Lips they you could snort No-Doz and challenged them do it. Now, if they only would've went in to a studio that night (sans horn players) and cut two on fire tributes to the Replacements and the Real Kids.
http://www.kindturkeyrecords.com/
Posted by Dale Merrill No comments:

Thursday, June 30th-M.O.T.O. and the 7th Day Creeps at the Roche Bar in Port Huron 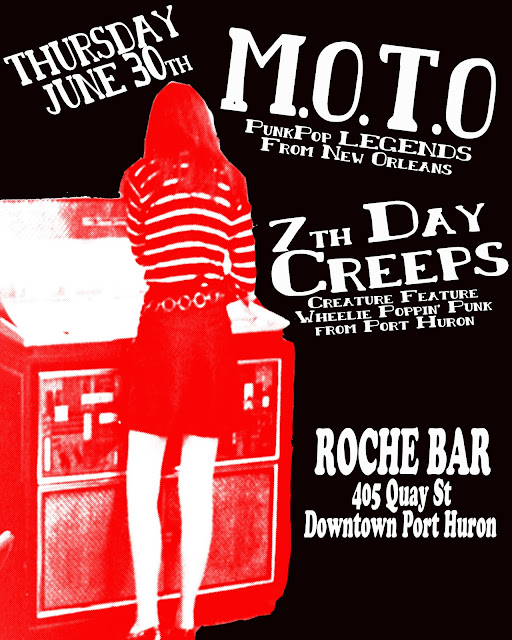