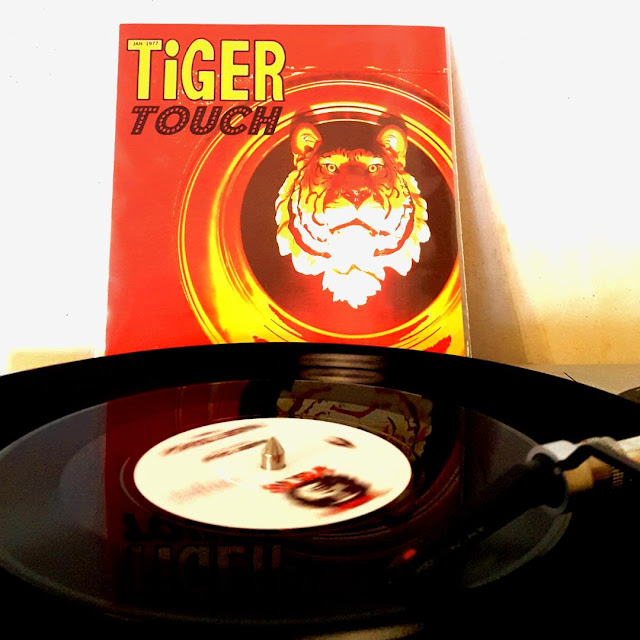 I don't recall the last time I've blurted out "Triple guitar rock action attack." I know it has been a long time but it was the thing I found myself chanting within a few seconds of this record from this Portland, Oregon's Tiger Touch spinning on my turntable.

Studying the flight records of Radio Birdman, can name a bad ass rockin' Blue Öyster Cult song for every occasion (but also that know "Don't Fear The Reaper" was strictly written to appeal to girls) and the real king of rock-n-roll was, is and always will be Chuck Berry, both songs here are the kind of jams that fueled many a "boys are out on the town and drinking every cheap beer in sight" rowdiness of days of yore. An era when vinyl was claimed dead but cats that shopped record stores hadn't gotten the news and were picking up the latest slabs of wax from Crypt, Estrus and Empty that were displayed on the shops walls. The era where the Supersuckers hadn't yet become a parody of themselves and also an era just right before Scandinavia really started infiltrating the dive bars, bonfires and basement parties of the USA with their Nordic overhaul and engine boring.

Yep, that wrinkle in time when "RAWK" would be yelled as expression of exuberance instead in a mocking tone directed at some goofball in a Motörhead t-shirt and a teenage dirtbag moustache who just six months before was trying to convince anyone who would listen that Jets To Brazil were the most important band in the world and were about to change rock history forever.

Tiger Touch are not set out to reinvent any wheels. They just want to burn rubber! People shouting "AWWWW YEAH!" while watching the smoke rise and breathing in the fumes.
Get rocked at Tiger Touch's Facebook page
Posted by Dale Merrill No comments: