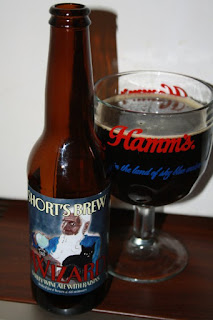 Here I am a few weeks into a new year and, DAMN!, it's already seeming to fly by. Full time student, full time parent and full time job seeker. Then factor the program director gig along with the mundane day to day things likes laundry, making dinner and trying to fix up an old rickety house that has two new problems for every one that gets fixed and it all makes leisure time a rare commodity. Tonight though I have found some and Bellaire, Michigan's Short's Brewery has released a barley wine called the Wizard so dammit I am going to sit, sip and contemplate what kind of magic it has going on.
The color is on the darker end of the barley wine scale with it's mahogany and ruby shade. The head is minimal and recedes into a constant collar and slightly cloudy cap that hangs on through the entire glass with slight, spotty lacing. Nothing unusual for a barley wine in respects.
What is unusual is almost everything else about it. Short's fancies themselves in making things that are out of the ordinary and this is no exception. For this they've decided to tweak the standard barley wine recipe by adding raisins in to the brewing process. Instead of the green apple and apricot aromas that usually show up as the dominant backbone of most barley wines I've tried in the past this Wizard bears more of a scent along the lines of black cherries and molasses that sends a warming sensation up through the sinuses. One of the most interesting things about the way it smells though is that it's not uncommon to detect the higher end of the alcohol content that barley wines sport but here, even with an approximate ABV of 11%, it's boozy bottom is hardly even noticeable.
The raisin show up first in the flavor. They seem to bring a dark oak like nuance to the brew while throwing in a curve ball of vanilla bean in as an accent. Through the middle and end it's shifts several times on the palette first with a walnut and dark chocolate qualities then ending slightly astringent with a hoppy floral bite. There is quite a warming effect in the finish where otherwise well hidden alcohol content comes out to say hello.
As an introduction to barley wines I would most likely not suggest this to a beginner as it's not the most traditional take on the style but for a veteran looking for something different that can be done with it I'd tell them to put this at the top of their list.
http://www.shortsbrewing.com/
Posted by Dale Merrill No comments: 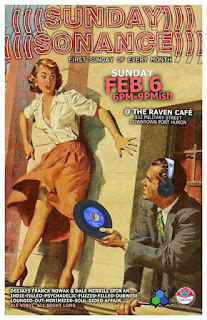 The first Sunday of every month Mr. Franck and yours truly drop the needle on some tracks at the Raven Cafe in downtown Port Huron. Our next one is on Feb 6th. If you're in the area stop on in for food, drinks and, of course, some great tunes.
More info at http://www.ravencafeph.com/
Posted by Dale Merrill No comments:

GENTLEMAN JESSE and his MEN "You've Got The Wrong Man" 7inch sage to the current batch of power pop resurrectionalists that it takes more than a cheeky Paul McCartney smile and a skinny tie to play the game and be taken seriously about it (or at least make the girls dance NOT just because their boyfriend is the band). For one, having at least a cupboard full of hooks that can be added to stew. Not only does it seem like Jess and dudes got all the right fixins' but have a few special recipes to go along with them.
While listening to either song on this record-the antsy surf riff tempo'd and many layered vocal harmonies of "You Got The Wrong Man" and "Stubborn Ghost", which resembles the Boys getting their best Raspberries on-it's as if the River Mersey (you know, the one with the beat) ran through the sweltery, sticky summer weather of 2010 Georgia instead of the damp springs and autumns of 1960's Liverpool. Playing respect to the Rickenbacker jangling spectres and power-pop chewiness Gentleman Jesse and the Men know they aren't reinventing the wheel but have done their own customizing to the ride it sits upon. Hop in.
http://www.myspace.com/gentlemanjesse
Posted by Dale Merrill No comments: