At first impression here, if Columbus, Ohio based Day Creeper wanted to, they could be sporting girls pants, Rod Stewart haircuts and 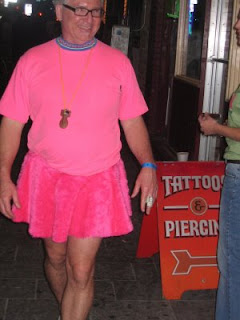 killing it in front of power-pop festival audiences all over the world. Loud, catchy and kinda toe tapping kinda stuff is what the first think the ear tells the brain it's hearing.It's the following though where both the ear and brain notice something a little more than standard songs about cars and girls structures going on. It sounds like if the band would ever want to play for throngs of popsters, who are waiting for all the original members of the Spongetones or whoever to take the stage, it would be to confuse or frustrate them.
The reason why is because instead of spending weeks practicing harmonies that would make the Beatles blush from such idolizing or taking a guitar solo the way Rick Neilsen does this is much more plug in, see what happens and go for broke here. What results is something much more rag-tag, comfortable and broken in on the four songs here than studied and starched.
The sound is that of the Midwest where 70's punk rock buzzsaw downstrokes the same rust belt environs of 60's teenage jangle and where handclaps and snotty singing are commonplace. Think if during the recording of their album Hootenanny the Replacements spent time wanting to be a machine bent of perpetual motion instead of wanting to sounding like poetic wino's with their hearts wrapped in flannel or bands like the Yolks and Home Blitz laying sloppy kisses all over the Gizmos and you're in the same bar that has Black Label for a dollar a can that Day Creeper call a home away from home.
https://www.facebook.com/pages/Day-Creeper/119929404710560
Posted by Dale Merrill No comments:

Records considered Punk "Fucking" Rock have tend to have some problems though when it still comes to living up to that claim times later. There's many times where records dubbed that sound, well, kinda like a yoke some years down the road (if they weren't donned with the title as one to begin with).
These Austin, Texas gruel mixers have no problem with the former and have no problem with the later either. If this is punk rock of any sort it's the best kind. You know the kind. The bottles flying/girls crying barroom rock-n-roll kind.
Stones swagger. Stooges sickness. Dolls decadence. Dead Boys drunk and disorderly. It's all balled up and thrown into a pot of chicken grease and bad attitude juice here and boiled on high til the entire town smells of it. This isn't the not the macho, thrust the chest out so the can see this is a VINTAGE AC/DC t-shirt, Leather booted on the monitor for the 8th guitar solo in the last 5 minutes RAWK or Heavy Metal Fonzies stuff that you couldn't throw a Les Paul copy without hitting ten of them that overran the landscape a decade or so ago. Four juicy cuts of meat eating, stinking of beer sweat, slob celebrating ROCK-N-ROLL. Play this record SUPER FREAKIN' LOUD and be prepared to have it kick your ass all over the place.
http://www.facebook.com/OBNIIIs
Posted by Dale Merrill 2 comments: