Since this is the 4th show we could've dedicated it to strictly four on the floor beats. That would've gotten really tedious though. Dig new things for your ears from Heaters, Century Palm, Sex Snobs and Nun. Let things from the past like Thomas Leer and Robert Rental, Cows, No Trend and Ultravox worm their way into your lobe. Of course, all kinds of gruel, gunk and goodies tossed about too.
Posted by Dale Merrill No comments:

Bonnie Brisker "So Much Lovin' (Deep Inside Me)"

Like with a lot of the 60s Detroit soul records that didn’t make a dent nationally (but may have gotten some play in the Northern Soul Scene in the UK) there’s not a lot of info on who Bonnie Brisker is or if this was the only record she did. Heck, with this record even the year it was released is kinda fuzzy but judging from the catalog number it’s safe to assume it is early ‘67 (the previous catalog number, MC 002, was a “I’m Going Christmas Shopping/Santa Goofed” by Horace Williams and Choker Campbell & His Magic City Orchestra was released in December of ‘66.)
What is known about Bonnie is that she was the sister of Detroit saxophonist Miller Brisker who toured and played with Aretha Franklin, most notably on her Aretha In Paris album, as well as the arranger of “I’ll Be On My Way” by Bob & Fred which appeared on Big Mack, another Detroit label of the era.
Though both sides of this record have a nice live and loud sound with some rough edges intact the a-side, “Someone Really Loves You (Guess Who)”, tends to lean a little more towards some kinda sophisticated Mary Wells territory. This b-side though gets much looser. The bass line brings everything to a boil, getting the band to lock into a total proto-funk groove and Bonnie lets everyone listening know what she has and what she needs.
Posted by Dale Merrill No comments: 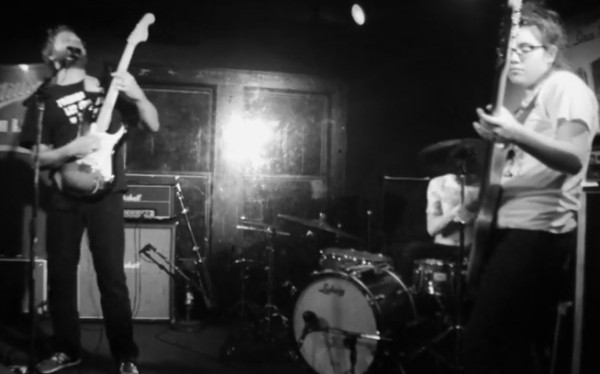 As if being a string bender for the OBN IIIs and one of the noise bringers on the Blaxxx project wasn't already enough to satiate Texan Tom Triplett's need for loud rock-n-roll action, he also fronts up purveyors of bad attitude sounds, the Snooty Garbagemen, too.
Unlike the shake your hips while punching you in the gut Stones/Dolls boogie slime happenings of the former or the barbed wire wrapped distortodelic funk of the latter; this gang is much more elemental with its intentions. A power trio in a most primal sense, the songs here are locked in to swift and constant rhythm pummeling, all on a conquest for the constant taste of red meat and letting most of the human race they can fuck right off.
After introducing themselves with a flurry of psych blues slime guitar racket and the bass & drums determined to cause destruction on the instrumental "Sad Sack" the band then pushes the listener into a garage. Not one of those new sparkly garages that it seems chirpy, smiling kids with a penchant for digital reverb want people to think they bob their heads in unison all day these days but a dingy, dirty one where a bare lightbulb hangs to lights your way so you don't get tetanus from backing into some random rusty piece of oil soaked, soot coated jagged metal scattered all over the place.
When Tom's virulent voice one ups Johnny Paycheck stupid job sentiments by ten on the Motorhead/Tad infected "I Quit" it's obvious he's had enough and doesn't know but still doesn't care how he'll pay his bills. Most likely though he and the band would just find more time to be shit kicking punk rock down the street like they do on songs like the thunderous "I Can't Find My Keys", dancing on graves to the spazzed out beat of "Apart At The Seams", trying different sized drill bits on heshers eardrums like they do on "Heavy Metal Brains" or bumming out hippies acid trips the way "Answer Your Phone" has the power to do.
Yeah, the Snooty Garbagemen can scoff your trash. They have no need for it. They're doing just fine building a fetid, obnoxious heap of their own.
http://12xu.net
Posted by Dale Merrill No comments:

Smashin' Podsistors: Do They Really Come In Threes?

Falling into to autumn all of a sudden with old noise from Public Image Limited, the Necros, Bantam Rooster, Cosmic Psychos and th' Faith Healers. New sounds from Dan Melchior's Broke Review, Raw Pony, Buck Biloxi and the Fucks, Flying Saucer Attack and Andy Human & the Reptoids. Other various bits of dissonance and melody tossed in for good measure too.
Posted by Dale Merrill No comments:

Brandishing stripped to a primeval root drumbeats, guitars that whirr like shards of a beer bottle in a garbage disposal and a bass sound that's akin to a mudslide plowing down whatever is in it's way, Columbus Ohio's Raw Pony put a lot of emphasis on the RAW.
What's starts out as a cover/homage to the song that Bo Diddley named after himself on the a-side quickly turns into something even ol' Bo couldn't have fathomed when he was trying to appeal to the young folks in the crowd that where coming to see him in the 90s by doing some cheesy, disco synth heavy rap about just saying no to drugs and yes to challenging Saddam Hussein to a fistfight. The case here is more like the Gories recounting very intense bouts of night terrors while kicking their way out of a tin shed full of hungry and feral cats in heat.
"Shattered" (not the Rolling Stones or Exploding Hearts song) ups the cavewoman stomp by covering girl group melodies in sludge then trying sticks of dynamite to them. Light the fuse, run and then stand back to watch it splatter.
www.facebook.com/rawponyoh
Posted by Dale Merrill No comments: 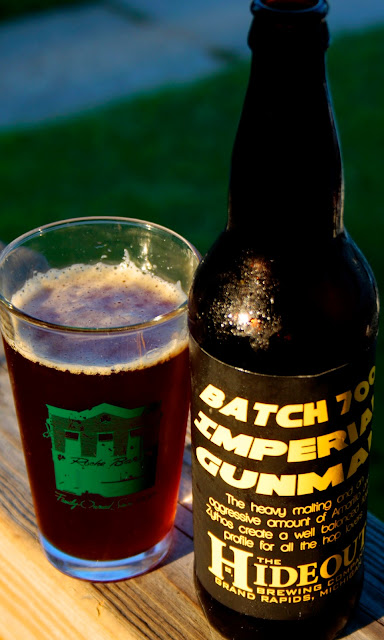 For many years I was serious about overhopped beers. I was all about the pine, the citrus, the weed, the bitters, the burn and so on but it was getting to a point with me where it some beers didn't even care about complexities or any other flavors. It seemed a quite a few brewers were in a contest to top each other on who could capture the flavor of spending a week having to eat yourself out of meadow and have that taste stick around for days, maybe even weeks, in the back of your mouth.
It got ridiculous so started to keep away from the style, shifting my palate to other ones. Not because I was scared. It was simply because the antics of it all got stupid. It was gonna take something that cared something about more than being just hop juice to get me to try an IPA I hadn't before. Over the summer, Grand Rapids brewery Hideout had bottles of some of their wares (somewhat) showing up in my (somewhat) part of the state. Perusing the shelf I saw that this IPA promised heavy malting ALONG with a generous helping of hops. On the label it promised that the hop lover what they wanted but also something a bit more well balanced.
"Hmmmm, a brewery that is making an IPA that remembers malt is still supposed to be tasted in the profile AND they're pointing out that there's more to it than just a hop explosion?" I thought to myself. "You're coming home with me."
Pouring a musty, cloudy chestnut brown in color with a dense head that melts fairly quickly, leaving patchy lacing behind, there's a very earthy look to this beer. Smells of chocolate malt, candied fruits, dates, pecans along with lemongrass tinged hops stand out firmly on the nose, working in harmony instead of one of them feeling the need to push its way to the front.
On first sip a slightly bitter than usual traditional barley wine comes to mind. Bakers chocolate, roasted coffee and dried figs serve as a backbone and the basic stricture that can be tasted all the way through the beer. The Amarillo and Zythos hops take steps into the limelight take solos that pay nods to black pepper, candied yams, orange peel and vanilla beans.
The finish has a bit of bitter zing that hangs around the sides and the back of the mouth while the throat feels a bit of a warming rye whiskey and cocoa thing happening.
With some new brewery popping up every day in this state its hard to keep track and even come close to trying everything. Hideout has been around for over a decade but just started bottling stuff the last year or so. They're a pretty small operation so their beers can be hard to find but things like Imperial Gunman along with some of the other beers they've been doing make them worth seeking out.
www.hideoutbrewing.com
Posted by Dale Merrill No comments: 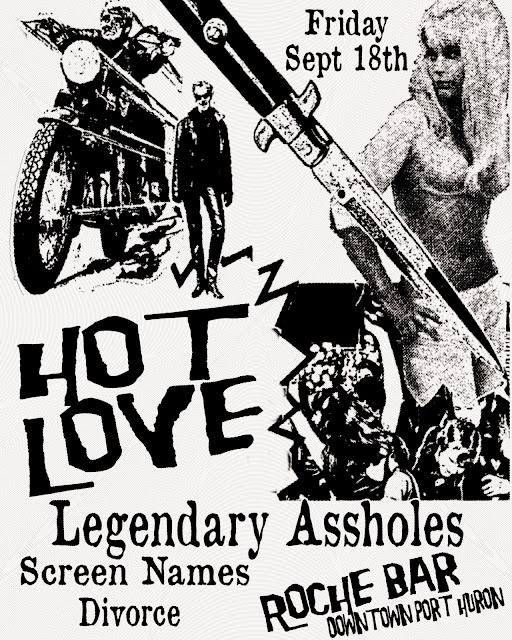 Back in April Ohio’s Hot Love came up to Port Huron and showed the city how to shimmy. Resembling a Kasenetz and Katz creation escaping the bubblegum factory and setting up camp in a junk yard filled with old stock car parts, their sound is groovy, gooey and raucous.
The Legendary Assholes are a local supergroup of sorts. With members of the Hunting Lodge, Shame Exposure, the Feck, Skin Chiken and Forced Anger among their ranks they form a union of that have seen and heard it all and now just simply want to play loud and rock out.
Ever heard of a prairie oyster? It’s a hangover cure made with a raw egg, Tabasco, Worcestershire sauce, pepper and gin. That’s what Screen Names tastes like, with a dash of sugar added. Punk for kids with feelings.
This may be the last show I am setting up in Port Huron for awhile due to some other things I want to start working and concentrate on as well as a multiple of other reason. Come on out for the hurrah! More details over on those Facebook event thingies.
Posted by Dale Merrill 5 comments: