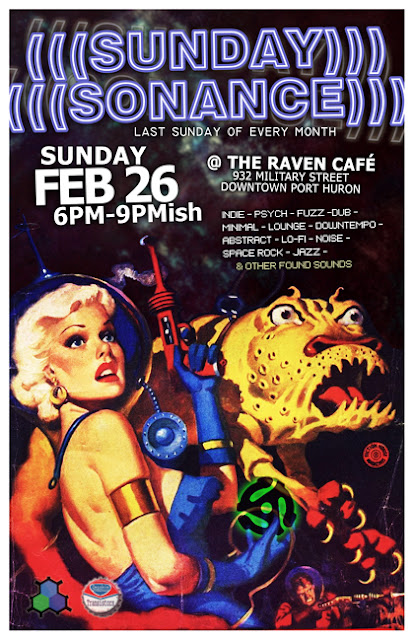 Well, If some of you locals were wondering where Sunday Sonance at the Raven Cafe in Port Huron went, as I know a few of you have asked me over the past couple of weeks, we have moved it to the last Sunday of each month instead of the first. We return this Sunday. I am already working on my crate of records to play. Looking forward to spinning them and seeing some of you there.
Posted by Dale Merrill No comments:

It's been a while since we've paid a visit to Mud City but some rumbling heard off in the distance got closer. Eventually, it got so so loud that we had to take the exit and check out what all the noise was about.
The familiar faces may sport a couple wrinkles from hard rockin' hard livin' and there might be a slight touch of grey.
The attitude though, is still bad. Still pissed off. Still ready to toss it's leather jacket to the ground, raise it fists and stomp suits with it's boots. That's right kids-Duck! Because the beer bottles may start flying.

On their two songs here, the Main Mangler Ted still spits a gobby mixture of punk rock disgust and exhaust huffing bark in his voice. His guitar has always snarled like a swarm of killer bees pollinating gasoline and now that attack has been doubled, just in case the initial stings didn't inflict enough blisters, with the edition of Matt wielding a second axe of firepower. Add in Manglers stalwart Brian on drums and new bassist Mary providing a turkey drum in each hand BOOMBAST and it's something like Osterberg/Williamson's Kill City and Let There Be Rock Acca Dacca meeting in a bar. Not to fight each other but to kick in all the faces the frou-frou effects board experimentalists and bearded adventure metal muppets.
Some years a go RAWK became a bad word. The Mud City Manglers have crawled back out the ditch again to make it DIRTY.
If the Manglers are the ones to roam around Pittsburgh, rattling the roads on street bikes looking for bars to drink their entire Yuengling supply-the Plastered Bastards are out in the woods, jumping hills on stolen dirt bikes and hopped up on something crazy folks out on the creepy state roads manufacture. Spun tight and ready to snap their two songs take the Misfits monster punk and drag it behind them in a jean jacket that use to belong to Blag Dahlia. Then they beat it with a bike chain they stole from Venom. Amps blare and people get bloodied.
https://www.facebook.com/pages/Mud-City-Manglers/142455942451571
https://www.facebook.com/pages/Plastered-Bastards/162624753753146
Posted by Dale Merrill 1 comment: