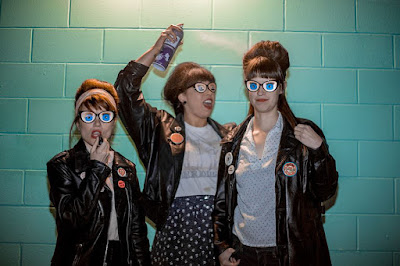 Sounding like a band John Waters called on Herschell Gordon Lewis to find for an upcoming film is no small feat. Sure, a combo here and there could fit such a role in the past in in the now it could be a little tricky.
With a tough black leather exterior and heart of chewy gooey bubblegum it as if Bloomington Indiana's Thee Tsunamis were born to play the part though. Taking a girls gone bad in the garage form and giving it enough twists and turns to keep the trip interesting rather than stopping at all the same burger stands those before them pulled the car into.
Whipping a big scuzzy ball of fuzz as introduction, lead off track "Female Trouble" is punk rock attitude, a grungy bounce and flirts with you while shoving a knife in your gut. This bad egg disposition holds its place like a beehive 'do plastered with two cans of Aqua Net on songs like the motors missing mufflers rev up at surf beach "Drag", the frat organ blurted and serpentine guitar wiggled "Skip Tracer", the Everly Brothers date daughters of the devil on "Dummy", "Shakee Jake" hopped on on Bo Diddley buzz and strychnine laced candy apple that's "Trash Talk." The already spiked fruit punch also get laced with something a bit more mind melting on"Kill Kill Kill" and the Cramps via labelmates Apache Dropout distorted roar of the album's title track
With all this stompin' going on though even the most brassy need to let their guard down once in awhile and they don't hesitate to let the waterworks flow on "Crybaby."
www.magneticsouthrecordings.org
Posted by Dale Merrill No comments: 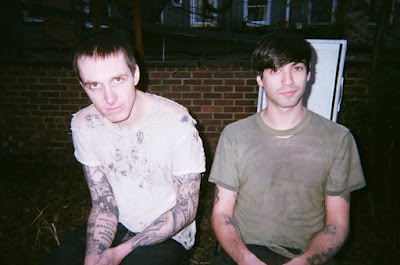 As a little kid where you afraid of thunder? To help you get over the fear did your folks tell you not to worry as it was just the gods bowling and the sound was simply balls rolling down the alley?
Well, if that's the case the rolling rumbles down the alley here are that of Zeus and Thor are a two man team throwing perfect games while leaving cracks and divots all over the alley.
Comprised of The Men's Ben Greenberg and Michael Berdan or Drunkdriver, Uniform deal in, despite the record's optimistic title, a doom laden metallic industrial sound that's akin to the clamor of Cabaret Voltaire's The Mix Up and Big Black's nail gun to the cranium than it is the Motorhead goes disco workouts that Ministry filled dance floors with.
Opening with the title track, a reverberating electronic throb pushes to the brink of pent up tension. A bass drum thump joins in which is quickly followed by dense guitar slashes that repeat chords that are like opening salvo of a fist in the air 80s heavy metal anthem and audio demonstration on how to perform a death on something by a thousand tiny cuts. When Berdan's echo laden and dripping with contempt verbal bawl appear the floor drains are already clogged and gurgling back bubbles of blood.
The intensity doesn't wane on the next two tracks, "Indifference" and "Footnote", with the former sounding like a hatchet murder of a shoegaze band in a House of Mirrors and the latter like watching a slow motion loop of the evidence of said murder scene being destroyed by dynamite. Speaking of explosions, "Buyer's Remorse" follow and it detonates into a post hardcore blast that repeatedly slams its head against the wall in a rapid fire succession which refuses to let up for close to six minutes.
With all this darkness going on one must wonder if a little light is ever going to be let in. "Lost Cause", a collaboration with Coil's Drew McDowell, does manage to let some in but it's a harsh white light that illuminates an autopsy room rather than sunshine to bask in. "Learning To Forget" closes out the record by moving like an iron armored caterpillar inching it's way through a maze of ice.
12xu.net
Posted by Dale Merrill No comments: 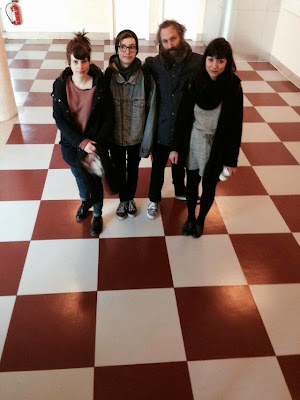 In a post everything world where it is said everything musical has been done it is now a great trick to find a sweet spot between a sundry of sounds.
For Vienna, Austria's Lime Crush that place isn't sitting by Franz Schubert under a blanket of snow with a plate Wiener Schnitzel and wondering what the hell Midge Ure was going on about in the song pretty much nicked from the Walker Brothers and named after the town they live in. Instead, the band extols the virtues of ramshackle DIY and what can be done with it if some sparkles are added.
Leading off with "Graveyard", vexatious guitars scratch until they bleed over a bouncing beat while female vox sounds awkward but sure of the intent of making the point they set out to do. Next, "Baby" starts out sounding like it is going to follow some sunshine of 60s garage pop but quickly decides to turn off on a much more bumpier path that bands like Kleenex traveled often. Things wrap up with "Honk Honk." Not wrapped quite tightly though as it's very jittery spoonful of stops and starts that, even though it sounds like pieces are peeling off it in big chunks, it reaches it's destination.
fettkakao.bandcamp.com/album/lime-crush
Posted by Dale Merrill No comments: 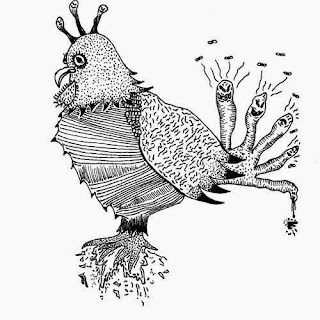 The written buzz around the hive about this record is that it's Drew Owen of Sick Thoughts doing hardcore. The buzzing in the ear when listening to it is because, well, it's Drew Owen of Sick Thoughts doing hardcore.
Now, to call this hardcore one needs to specify that this isn't the macho meathead stuff that rolled in sometime during the late 80s that gets fat guys with bald heads and goatees talking about when they remember Warped Tour before "it got all corporate." This hardocore is the kind that was made by the spazzy kids that got beat up by the macho meatheads for being "punk rock faggots" or whatever the insult of choice was at the high school you were attending.
Sounding like they landed right in the middle of midwest hardcore of yore such as Die Kreuzin and the damaged rage of more recent bands like the Bad Noids, these eleven songs clock in about twenty minutes total and not a second is squandered from smearing vitriol.  Caught on tape in scuzzed and crackled quality, guitars sounds seriously mauled as the blare and grunt, the drummer probably starts to worry that his arms are going to fly off if he's asked to play even faster and the singer probably takes a break between each song to guzzle curdled milk and swallow some gravel to keep his voice in top shape.
It's all heads down and running straight into a burning warehouse that stores bleach and other toxic items used in households every day. Even if they come out in one piece, this is an audio equivalent of the long lasting aftereffects of the exposure to them.
www.snotreleases.com
Posted by Dale Merrill No comments:

Though it is common in a lot of places that brew beer now, Michigan is one of the places that does not think twice about piling on the hops in almost every style of beer. Being a self professed hop fiend myself this has been a great thing when it comes to giving something a try. Lately though it has gotten to a point where it has become a bit of silliness.
When perusing the beer aisles recently I spotted a psychedelic/pop art label bearing the name of west Michigan brewery Saugatuck. It caught my attention so I gave it a closer look.
"For real?" I thought to myself.  "Do they really need to turn up the hop volume up to eleven on wheat beers now too?"
While mulling the though of purchasing it over I remembered that Indiana's Three Floyd's does such a thing with their Gumball. Gumball is a pretty awesome brew so I figure "Eh, what the hell" and put my money down on the counter.
Hazy brass in color and a very slight but still rocky head from a light pour this beer instantly gives off aromas of orange marmalade and an assortment of tropical fruits before even lifting it up to the nose for further investigation. Once giving it a closer sniff notes of wheat bread along with tinges of banana and clove poke their way up through the bright tart smells that stand tall on top.
Tangerine, mango and tart kiwi are very noticeable on the taste buds at first sip. These tangy and slightly oily bits of zest move over to the side a bit towards the middle to let some doughy yeast and coriander through. It finishes fairly clean with some citrus note lingering for a little while after.
To say this is a Michigan answer to Gumball could be a fair assumption but it also seems a little unfair. I'm not saying that Saugatuck may have not been inspired by the idea but they have done their own take on it. Sure, maybe hopping out a wheat beer is not what is "suppose" to be done with the style but this has quite a refreshing taste. As a whole there is a funky farmhouse/saison thing going on here that could be intentional or could just be a happy accident. Add this to your rotation list of sunny day beers for this summer.
saugatuckbrewing.com
Posted by Dale Merrill No comments: