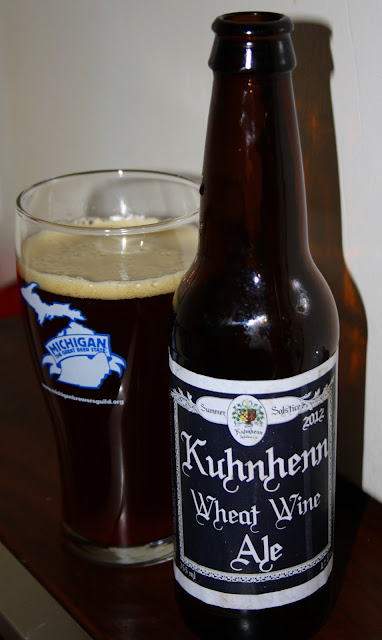 First things first. There is nothing better than aging a barley or wheat wine. Letting them sit in a bottle, condition and come back to it a year or so later and see what crazy things the sugars and fermentation will do. Usually, from most of the ones I have experienced it is more times than not complete beer bliss. The thing is though it is best if you have two bottles so you can get a taste of it fresh and then one down the road to compare notes.
THIS is something I should have put in the cellar. I only have been able to get my hands on one so far and there is was teasing me and calling my name. Everything Kuhnhenn's brews is in small, small batches and what ever they make is always epic, over the top and pretty much amazing. I tried to resist. I really did! It's kept calling my name though so I could not resist.
OK, enough hype here and I haven't even popped the cap off it yet.
Pouring opaque brown in color til held up to the light where it gives off some ruby red shimmers my curiosity doubles. The shades of barley and wheat wines are always interesting as they vary from one brewers secret to another. The head is minimal and melts fast but does leave a slight cap behind and a constant ring making a thick lace all the way through the sipping.
The aroma of this is huge as partially leaps out of the glass. A large malty backbone gives off a mix of molasses & caramel which is then wrapped with the scents of concord grape, vanilla and notes of tropical fruit. Interestingly enough for the big 11% abv it packs-the boozy qualities are quite muted on the nose.
First thing that comes to mind on tasting this is how soft it feels in the mouth and on the tongue. Not bubbly or light but very fluffy. Then the flavors kick in and, my oh my, do they. Quite big some somewhat grape on the front. That is followed by a bit of wheat spiciness. The layers keep coming as there is a bit of smoky caramel next, some dark cherry tartness, brown sugar and clean not to sticky finish of deep lemon. As this brew breathes in the class all these complexities grow much more pronounced but never boss each other out of the way or turn into just to mushy muck of flavors. The alcohol IS there in the flavor but is well hidden though it does bring a tingle to the body letting a person know that even though this is a gentle giant it would get the best of you if you sat down and decided to have session as it would turn into a tussle of trying to walk a straight line after a couple
Yep, I should have saved this to see how it aged but, like I said, I have only been able to get my hands on only one so far but Boy! Oh Boy! it is sure dang delicious.
www.kbrewery.com
Posted by Dale Merrill No comments:

Wheat wine is still pretty much in it's infancy as far as fancy ale's are concerned but out of nowhere already many different tweaks on it have already began. Two of the one's we really liked here at Smashin' Transistors headquarters have been Founder Nemesis and New 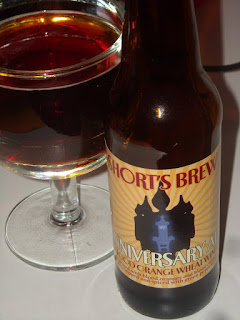 Holland's Pilgrims Dole. Both of them were excellent and quite original with what they're doing but the style, like it's older sister Barley Wine, a little of them can go a long way (and can lay down some hurt in the morning too). That doesn't mean we're gonna shy away from them. Just have to practice a bit of moderation when they come around.
Rumor is only a couple of cases of Short's 6th Anniversary Blood Orange Wheat Wine even made it to St. Clair County. Luckily, having a good rapport with a couple of the beer sellers in town we've been able to give it taste and since they're only allowing one bottle per customer per visit we can be moderated on how many we can drink at a time.
The color here obviously resembles blood oranges. A clear dark red color that borders on ruby. No head but a orange ring all the way around the top. The nose is quite interesting here. A orange blast comes out on top. Right after pouring it and giving it a moment to breathe the aroma could be noticed rising out of the glass and filling the room. Raising it up to give it a whiff the hops, which have a citrus aroma to them anyway, accentuate the scent even more. There's also a slight detection of the green peppercorns that we used in the brewing process too. If we were to judge this beer just off the scent alone it would be a winner.
First sip and it's made known that the smell was just teaser. The flavor hits the tongue & mouth just like a freshly peeled orange on a sweet summer day. The +11% abv sends quite a warm rush through the body on the first sip too but all and all the high booze content in the brew is hardly detectable. The middle has something similar to a very bold Sweet Tarts candy giving way to some more of the damp hop characteristics. Pepper comes out a bit in the finish but doesn't overwhelm any of the other flavors that this has offer. Orange flavors, some grassy spices and the dry hang of other wheat wines we've tried sticks around slightly in the end but for the most part it's very clean-n-dry and refreshing. Another way of looking at it is the strangest but tasty Sangria side road people can ride on. Even for those who aren't much into fruit/vegetable beers, present company included, will most likely wanting to have more than just one of these a session. In that case, I guess it's a good thing that, in this town at least, there's a one bottle per visit on these because I'm feeling good off just one 12 ounce bottle and could definitely be in the mood to down some more but then would most likely in the A.M. be thinking "Damn, how can something that tastes so good last night make me feel this spun out this morning".
http://www.shortsbrewing.com/
Posted by Dale Merrill 4 comments: