Jokes started almost immediately between my friend Josh and when I mentioned I had one of these in the fridge.
"Mexico's award winning craft brewery? You mean the same Mexico who's usual beer notoriety is that of every Young Country & Jimmy Buffet fan favorite 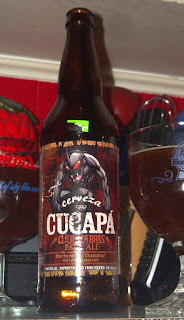 Corona?" Then rolling our eyes while saying "Oh Boy, this is sure gonna be special."
It's fun to doubt, talk smack and be pleasantly surprised. We were ready to give the beer a fair shake though cuz you never know.
The color is cloudy and dark almost brown amber. Despite a couple of cracks of how you're never suppose to drink the water in Mexico it looked to be pretty hearty as far as a pale ale is concerned. Wasn't much of a head to speak of and what was there didn't stick for very long but we gave it a pass because, well, some beers just are like that. No big deal ya know.
Our joking started to change from jokes to what we were afraid was going to become a reality. There was absolutely no nose from this beer either. I thought it was just me at first but Josh was giving me the same look. "What the hell" we both said at the same time sniffing the brew again and swirling it around in the glass thinking it need to be agitated a little to bring any aromas forth. "Nope! Still nothing" was both our consensus.
Maybe all the apparent ravings about it come from the flavor we both hoped. No such luck. Not much of anything there and what there was was metallic. Completely bland. We kept thinking it was something akin to a first time home brewer attempting to make like a Labatt Blue Pilsener-style lager but realized half way through it was a pretty lame idea so threw some lawn clipping from the back yard in it to give it some flavor. Yep, as the beer breathes a little bit of flavor comes out but it isn't those of hops or malt-it honestly taste like lawn clippings.
I've drank some pretty bad tasting beers through the years and even now have some higher end raved about brews that I haven't been to crazy about but it's rare that I dump them out half way through due to whatever it is that turns me off. Neither Josh or I got even halfway through our glasses of this before tossing them down the drain. As we all know Chupacabra is the legendary Mexican goat sucker. Now I want to know what is spanish for a really sucky beer? Who are the people raving about this anyway? Young Country & Jimmy Buffet fans? What a waste of time and money trying this was.
http://www.cucapa.com/
Posted by Dale Merrill 1 comment: