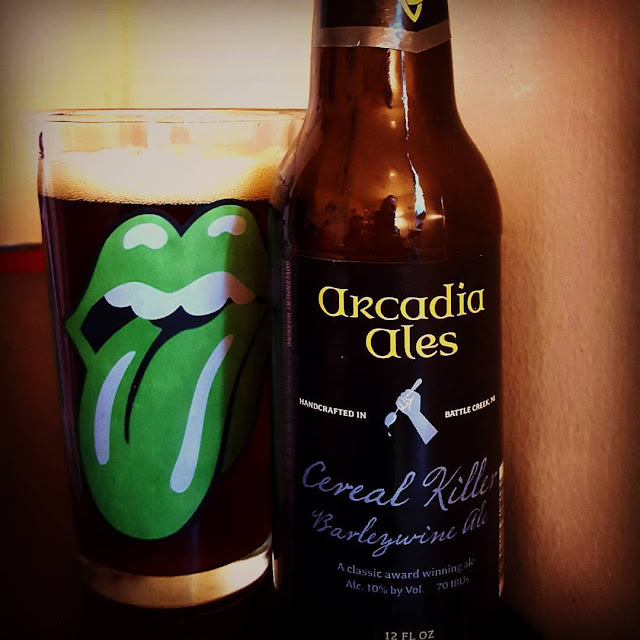 Sure, it is summer. And, yes, I am usually one of those kind of people that believes stouts are only suppose to be drank in autumn and winter. It's, y'know, one of those "things". Like not wearing white pants before Easter and after Labor Day or something.
Sometimes though you gotta break the rules. And if you're gonna break the stout rule might as go full bore. No boring ol' Guinness is gonna do. Now, a triple chocolate stout with some molasses and lactose included in the brewing process? Yep! That'll work.
A moderate soft pour of this almost black in color pour leaves just a slight cap of froth on the top. That froth does hang all most of the way through the glass and leaves spots of drifting lace all the through. The cocoa does stand tall in the aroma with notes of espresso with double shots of milk sugar and cream. There is a slight hint of alcohol in the nose too but not any more than one would expect from a 7% abv.
Baker's chocolate and the slightly burnt coffee from only gas station for miles bitterness is the first thing pronounced in the flavor. It's a little bit of a punchy opening along with some smokey bits but then the sugars from the lactose come along to soften the blow with just a enough sweetness to take the edge off while giving the beer a bit of creaminess in texture that was not noticed at first.
As the beer breathes and adjusts to room temperature-the molasses becomes more noticeable adding another level of subtle complexity. The finish leaves a large does of dark chocolate coating mixed with sasparilla soda fizziness behind in the mouth.
I don't think I could know back more than a couple of the current Michigan summer climate of thick humidity and shoulder frying heat. They are very chewy and quite warming. When the cold wind start blowing again (and they will-they always do) though I could spend a few hours sipping on these.
http://www.arcadiaales.com/
Posted by Dale Merrill No comments: