Right off the bat the swirly organ sound that the sound from the needle picks up here reminds me of wandering around while being quite boozy at a run down amusement park during summer vacation up north of my youth. One of those places were sounds of things hiding the noises of mechanical things squeaking, creaking and coming to a abrupt and grinding halt were people yelling "Fuckin' Ay, Brah" between telling random passersby that they had doobies (double paper rolled and still loose pin joints if they were to actually speak the truth) for sale for "two bones, brah. Best connection in this place" (they weren't) and Foghat's "Fool For The City", "Smokin'" by Boston and Molly Hatchet's "Flirting With Disaster" (it may have been the 80's but the whoever was in charge of the place did their best to keep them alive and the customer satisfied. I even heard they fired the dj of the Himalaya ride for playing "too much punk stuff like Rocky Burnette's 'Tired Of Towing The Line') over loud speakers that spent too many Michigan seasons exposed to the elements. 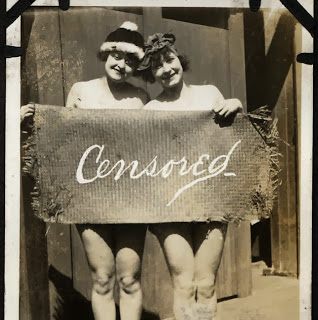 Well, that and the weirdly out of tune and always wobbly sounding pipe organ sounds coming from the carousel where half the paint chipped horse didn't even go up and down anymore Add the sound of screams of children (not ones of joy. Ones ranging from disappointment and be really creeped out) and parents arguing with that mean old cheap vodka stinking milkshake in the box office. I can hear the crusty old Electrolarynx voice spitting out curse words the sounded like retared Cylons all over again along with the Van Halen tank top dudes that still hadn't grown a full mustache the summer before mentioning "It's like 'I am Iron Man', brah."
Coincidentally, the lead off track here, "Oaks Park", with the swirly organ is about an amusement park. Along with keys, the trashy but tough choppy & fuzzed out guitars and Matto's voice sounding like a King Louie Bankston going all pro-wrestler announcer voice would definitely piss off the grits hanging around the band shell waiting for local bar band legends Nyght Fyre (or was it Mid Nyght Maniakz that one particular year) to take the stage because they do all the "good songs. You know like 'Lovin', Touchin' Squeezin' and they sound almost like the real thing". I close my eyes and can see the styrofoam cups filled with Southern Comfort and Mountain Dew flying now. I can hear someone yelling "We are here to rock out. Not punk rock fag out." Then someone would comment "At least if they're gonna play punk rock can't they play some good punk like something from the Cars or the Police?"
It's followed with "She Ain't All There". If you've ever wondered what happens when you take a Hound Dog Taylor boogie, give it shaken baby syndrome shower it in the sickly sweet and boozy Four Loko til it almost drowns then drink a couple glasses of milk before hollering about it-this could very well be the result.
The flip is hyperactive take on Bo Diddley's "Hong Kong, Mississippi" that would either make ol' Elias McDaniel put these guys on the back or make him write new lyrics to that "Just Say No" rap thing he would throw in the middle of his sets in the 80's & 90's to throw a complete wrench into the middle of his sets (all the while thinking he was being hip and contemporary and doing something the "kids" could get into) and make them listen to it as some kind of sage advice.
Hit Up Matto at Facebook to score a copy.
Posted by Dale Merrill 2 comments: