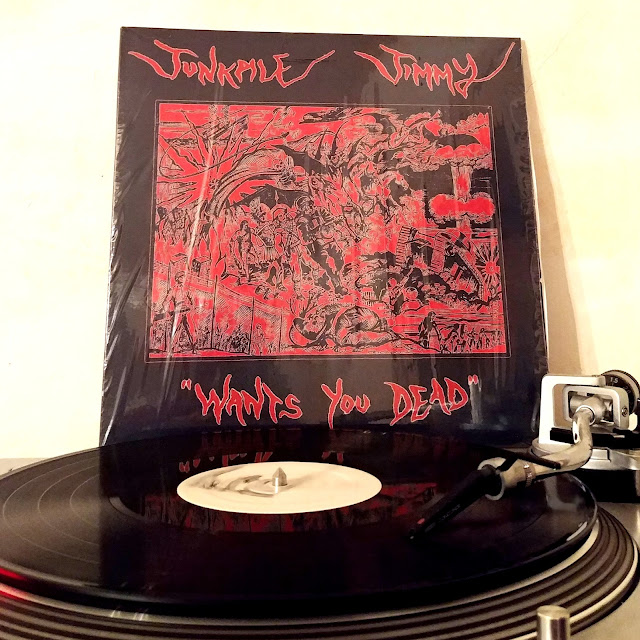 It was about a decade and a half ago when Junkpile Jimmy's first record, the double LP Alberhill, landed on the turntable here at Smashin' Transistors. It seemed to come out of nowhere. And in more ways than one.

Hailing from an unincorporated farming community about 60 miles southeast of Los Angeles and playing a form of found sound and mutant/junkyard band blues that made a band such as Doo Rag sound something like some local dad rockers calling themselves a blues band and slogging away at "Mustang Sally" or whatever.

Percussion clattering and crashing, Jimmy's hoots and hollerings like a man possessed by demented spirits and slide guitar so greasy and scorched, one would swear it was a rib bone just pulled out of fire was what he was using to get such a sound. The blues has often been called devil's music. The record did nothing to dispell such thoughts but it did do quite a bit to confirm them.

Now, here we are fifteen years later and a new Junkpile Jimmy record has reared its head. Well, it's not actually "new" as the music was apparently recorded sometime after the first album years ago. The Devil's Music analogy still works though but it's a different kind than it was before. The previous one was of the Ol' Scratch and a bottle of hooch kind of scamp sort.

Such things may seem that way with how the album's opener "Existential Dread" first gurgles then swells from beneath the dirt. Once it is totally above the earth though, the devil that torments these proceedings, as the cover of the record itself does more than merely hint at, is much more of the full-on satanic soul gorging sort.

Such things become blatantly obvious as the record spins. Most hints of blues leans of the first record are blackened to a charred crisp and any thoughts of some sort of delta here are more akin to the River Styx.

"Shed Blood Total" voyages down such a path, one that is fiery and frightening and plays games with your head. There's a moment in it where one might think the storm has past and it's time to surf but it's then realized that was simply a moment in the eye of the storm when the fire starts to rain down again. The dervish whirl of "Priest Of Set" just fans the flames higher and any fleeting moment of false calm up that may have happened up until that point are completely gone when "Moldering Hatred" takes joy in stripping off skin in a most painful of aural ways.


It's not that the record is a non-stop rumble & bawl blaring from some scorched speakers in an Abbadon dungeon though. "Dragon's Breath" is quite the rock-n-roll holler standing atop of some sludgy mountain and "End Of The Empire" feels like some Deep Purple jam cranked up loud in a car right before it crashes into a wall.


Get possessed here.
Posted by Dale Merrill No comments: