I was at the mall earlier today. It was not by choice but I needed something and in this two cow city where the downtown shopping district is pretty much knick knack & trinket shops, a handful of eateries/drinkeries and empty storefronts I had no other choice.
As we all know the mall is a good place to people to watch. It's also a good place to find something to vent about.

"YOU KIDS NOT PUNK ROCK AT ALL! YOU ARE ALL BOUGHT AND SOLD! YOU ARE ALL BRING LIED TO! THE PERSON THAT SOLD YOU THAT DEAD KENNEDYS T-SHIRT AT HOT TOPIC DOES NOT GIVE A SHIT ABOUT YOU! HELL, THE DEAD KENNEDYS DON'T EVEN GIVE A SHIT ABOUT YOU! THEY JUST WANT THE MONEY YOUR PARENTS ARE LETTING YOU SPEND!" and so on goes through my mind on a regular basis on the rare times I set foot in the place seeing all "the kids" walking around like zombies with their tattoos (how rebellious and individualistic are they anymore when insurance salesmen sport full sleeves of ink and grandma's have tramp stamps? You aren't bikers, rock stars or longshoremen. You live in a Pulte built home on a cul-de-sac.), piercings that make the dude from Skid Row's lip to nose chain thing look less like a jackass and filling their faces with Taco Bell (which apparently is more "punk rock" than Hot Dog On A Stick, the Flaming Wok or Burger King judging judging by the fat asses wearing Anarchy t-shirts standing in line, asking for extra sour cream and the largest cup for Mountain Dew Baja Blast available "and we get free refills, right?" Free refills are punk! Long live anarchy!).
Listening to this Women In Prison single I like to believe that whenever band members have to go to the mall though they are armed with butcher knives and flamethrowers with the intention of doing much more than just thinking vitriol and venting to themselves. And, yeah, they do sport tattoos (a lot of them as a matter of fact) but they're bona fide dirtbags not just weekend rebels.
The sound is that of jackhammer to a cesspool this Austin based band take the template of things like '81 era Black Flag and splatter it like brains all over the windshield in a car crash with the falling into a vat of battery acid search and destroy punk rock of Chicago's Functional Blackouts. The latter makes sense though as Women In Prison are fronted one time FB's snarly throatman Brian Nervous (now operating under the name of John Bondage). All three tracks here pummel the ears to a pulp with chainsaw violence punk rock that are glazed with echo that doesn't sound like it's some studio trickery as it does like it was recorded in a cave filled with bat shit and coyote carcasses.
http://www.facebook.com/pages/WOMEN-IN-PRISON/34957120381
Posted by Dale Merrill No comments: 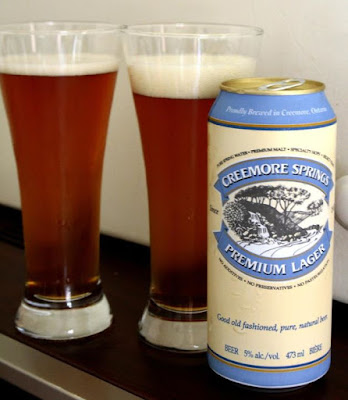 Located about just a little bit south from Georgian Bay (the Lake Huron region, not the city itself-that's about an hour and half to the northeast) in quaint little town Creemore, Ontario sits the Creemore Spring brewery which, according to what info I could glean from the internet, is the largest employer in that particular area.
It's color is nice amber shade accented with a right amount of carbonation to give a bit of a sparkle when drinking it out of glass in the afternoon sun. It's not too big but not too small head is a bit on the tan side filled with bubbles that when it fades leaves a light lace around. Looks good and that's always a good start. The aroma is strong but does have a nice bouquet of caramel, a bit of nuttiness and some citrus and grassy notes to top it off.
Tastewise it's pretty interesting. It starts off with a bit of a creamy sweetness from the malts, followed by a little bit of hop and then finishes clean. It's light and refreshing but also full bodied and well rounded all the way through.
I shared a couple of the cans (I was only able to score a sixer from a Canadian friend and fellow beer and music geek who brought them over for me to check out) with my wife and a friend of of ours while sitting out and enjoying the sun on an 85° afternoon this past August. All three of us almost at the same time "It's too bad this isn't available in Michigan because I could easier see this being something I would want to drink all through the summer." Summer is fleeting though but I think even through the autumn months (and probably even into the winter) these would still hit the spot.
http://www.creemoresprings.com/
Posted by Dale Merrill 3 comments: