RICHARD and the YOUNG LIONS: "Open Up Your Door": Song Stuck In My Head Today (Part 1)

Though the band was outta New Jersey and the song only went to #99 on the national charts it did hit #1 in Detroit on this very week in 1966.
The song has had a bit of staying power in Michigan too. In 1983, the Romantics included it on their biggest selling (and cheesiest sounding) album In Heat and the Demolition Dollrods played it regularly in live sets in the 90's.

There's a documentary on the band called Out of Our Dens: The Richard and the Young Lions Story that I have not seen but may be worth checking out on stay inside cold days that will be happening in this part of the world over the next 6 months or so. A copy of that can be found here if you're so inclined to order one.

From the name of the band, the song titles and the handmade sleeve one may expect some total loud punk rock with hate and ire. One must learn though that you can't judge a book, or a record in this case, by it's cover, name or song titles. Think about it. The band name could be some reference to chopping up cocaine or a nod to a group of cutters or something. 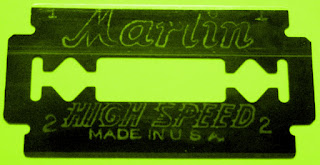 Playing in the modern psychedelia playground where Thirteen Floor Elevators can sway to Portishead and dark shades can be donned by all. A nebulous organ line intones impending darkness over a baked Madchester beat to lead off "I'm Sick". The song builds up into a blooong of foggy goth meets musty garage rock guitar buzz. Slightly distorted female come in adding a sultry/does she moon light as a cocktail singer during to the week thing to the building mystery of the tune while the tempo stays locked in a slumberous state.
Back in the olden day folks had the specific records they would consider late night jazz that fit the mood of street lights reflecting off rain washed streets in a city that never sleep vibe while sipping some something ice cold and warm the body with a slow burn. "I'm Sick" fits right in the middle.
While that song mushes the trippy meets swanky thing of the past four and a half decades into a potential trance inducing concoction-the b-side's "Linear Rerun" sounds as if it landed right in the middle of the 90's. A time when gals sported dark eyeliner & pixie cuts and would make mixtapes heavy on tunes from Garbage and would give them to boys in the mall who they thought were cute.
http://razorblazers.bandcamp.com