Saying Goodbye to Another Summer in Port Huron

Even though there will, hopefully, some nice weather for a day at the beach and so on, Labor Day traditionally marks the end of summer as far as most people feel. Here in Port Huron we decided to send out with some bang, hiss and rock-n-roll at the Roche Bar.
This past Friday, two Wisconsin bands played their first shows out of home state but, for members of both bands, not their first time playing this town and, in particularly, this bar.

Mike, frontman for Silent Drape Runners, drummer Gus and bassist Phil were a band that very few people around here knew anything about but knew the guys in the band. Mike played bass (and later drums) in the Mystery Girls, Gus in Hue Blanc's Joyless ones and Phil in Death and Taxes, all of which had rocked the Roche before. The combination of the three made us curious as to what they would deliver.
Sounding something like well oiled 90's garage punk band who formed after spending a weekend together listening to Grand Funk Railroad's On Time blasting through some dry rotted and mildewy car speakers, the band got the room jumpin' and the beer flowing. Did they deliver? Hell yeah! They delivered it hot! Don't take my work for it though; Jon Heibler (he currently Sugar Stems fame and once of the Catholic Boys) was part of the Wisco contingent that was tagging along for evening took to his Instagram page after their set to to declare them his new favorite band.
I believe that I have made it very well known that I dig Space Raft's debut album from earlier this very much.  Having worked with the band's main man Jordan in the past from the Mystery Girls up til the last band he had, the Fairweather Friends, I was naturally all over the idea of getting them to come here to play. Then, factor in folks who had seen them live already telling me how great they are of a live band (not that I had any doubts of that) I was all over the idea of having them make their out of state live debut here in the mitten and, in particular, the hamlet which I reside.
On stage, the band was locked in to each others vibe playing very tight but still having an organic looseness in their with soaring harmonies and iridescencent instrumental passages to make things a little scruffy, wiggly and oh so real. After they finished I made the statement that "I no longer need my Badfinger records any more. I got Space Raft!!!" It was only meant it to be slightly hyperbolic. I mean, I doubt Space Raft would turn down an helping hand from a former Beatle but they don't one. They are doing just fine own their own. I knew they would be good live but they went way beyond that.

After some relaxing and kicking back on Saturday afternoon, the Roche's foundation was ready to get rocked again for the evening and man, oh man! Did it ever get rocked!

Though being Hamtramck based, Radio Burns are no strangers to the city where Lake Huron starts and it's not just because their drummer, Nick Lloyd, was a member of the town's most beloved and legendary scourge, The Dirtys.
This night was their 3rd time playing around these parts in the last few months. Their sound, which has a stomp from 70's big rocks like Slade and a hyperactive melodic buzz like sorts such as the Marked Men, won people over immediately the first time they played in town and each time since then they continue to turn up a notch a blowing away show-goers. This evening's show was a bit of a bittersweet affair for the guys on stage and many in the crowd. A good soul from Port Huron, Denny Brown, who was a superhuge fan of the band, shuffled off this mortal coil the previous weekend from a heart attack. Radio Burns dedicated their set to him and sounds set him off on his next journey in style.

Though it was the first time for Obnox to roll through this town people were already down and excited for what they have going on. The college radio station here, WSGR, has been showing the Ohio band mad love and support since their first singles and the most recent album, Louder Space, spent a good few weeks at number one on their charts. Even with all it still didn't prepare the crowd for torrential downpour of sound the duo was about the throw down.
With a guitar growl resembling Poison Ivy Rorschach's swampy six string gruel if it was powered by a rock crusher and a voice that balances the fine line between a guttural howl, a funky foghorn and a very blazed out store front preacher whoop, 'Nox's creator Lamont "Bim" Thomas string slinging and pontificating commands attention. It delivers a one-two punch with the first one aiming to rattle brains and the second getting people to shake their hips. When a song come to an end, his crowd banter shows that if he ever gives up playing the rock-n-roll (which this writer hopes is not for a long time coming) he will still rule any stage he steps on as a stand up comedian.
Lamont's probably best known for his drumming gig in the Bassholes so he not gonna settle for just anyone behind the kit an with drummer Rose Safos he has a secret weapon. Her beat keeping is pummeling but not plodding and all about keeping the swing intact and driving the songs home. Those who stand to close to her when she's playing will probably get a concussion just from watching while the rest of the onlookers simply wonder who the drum set hasn't been reduced to splinters by the end of the set.

Carla from across the river in Canada made it over for the Obnox show and got a few things on video from it. Check 'em out.

It's always a drag to see summer go (even if weather wise it was a pretty lame one in this part of the world) but having a send off like this and the 100% fun it all was will give us something around here to look back on and say "Awww yeah! We need to do that again!" when the mean ol' winter and the pain in the ass things it brings become commonplace in the next few months.
Posted by Dale Merrill No comments: 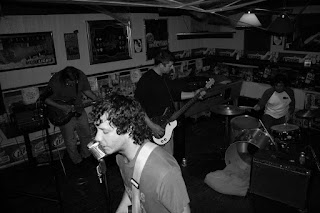 A few weeks back Hue Blanc's Joyless Ones came through Port Huron and did a live set on WSGR. Here is all it's glorious red lining glory. I did absolutely nothing to sweeten or trash the recording. This is how it sounded going over the air. Two mics in a room about the size of a walk-in closet.
Posted by Dale Merrill No comments: