There's plenty of pockets in the US of A where the Oblivians left a permanent scar on kids listening lobes. Parts of Wisconsin especially. A list of exactly who from the land of cows and beer that have especially marked for life could be rattled off but I'll leave that up for you readers to dig up and discover yourself.

I will give you one Wisco-combo currently has that kind of thing going on though. They would be Milwaukee via Madison's Static Eyes. The 'Blivs blare hangs huge in singer Lee Olsen's throat (you may remember him from trash rockin' terrors the Gut Reactions) when he screams and shouts and the band primitive rhythm pound and burnt to a crisp blues string bends.

It's not a straight up ape though as living in a snow belt makes the sound blistered from bitter north winds in the winter time rather than thickly humid summer nights of the south. It's that which this 3 song EP's title track and the cave dwelling of"Blood Moon" a chilly post-punk almost Swell Maps kind of warp and wobble that seems like it would shatter into a million shards if dropped to the ground. If and when that would happen, it probably wouldn't sound like breaking glass as much as it would a box of m-80's.

Pick up the record at Kitschy Manitou. Find out more about Static Eyes at their Facebook thingy.
Posted by Dale Merrill No comments: 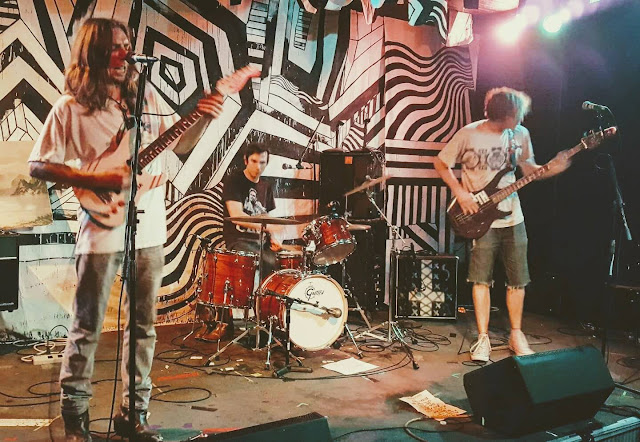 Yeah, it's pretty dang goofy too but they seem sincere in some kind of cheap beer dripping from their pores way in how they do it.
Out now on Kitschy Manitou
Posted by Dale Merrill No comments: