The Blue Water Bridge, which connects Port Huron, Michigan to Sarnia, Ontario is one of the iconic structures of the this area. There have been countless photos taken of it from when it was built in the 30's. That was made double when the 2nd span was built in the mid 90's.
Because of it being a constant model for who knows how many photographers it has usually not been one of my main subjects as I have chosen to usually take pictures of other things around the area. The other morning though the sun was rising and I had some time to kill before I went out gainful employment seeking and my college classes. The sky looked right, the angles caught my eye and I popped off a few photos. 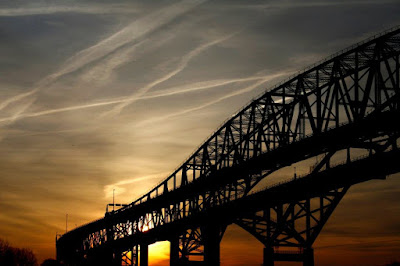 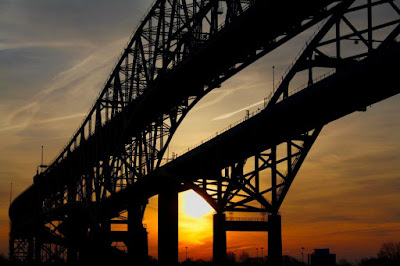 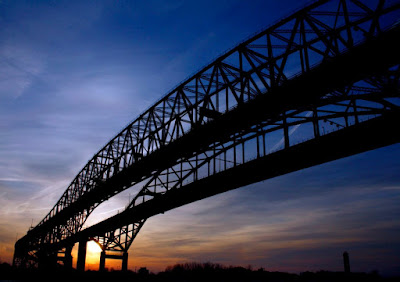 I always find it interesting how just over a few minutes the skies at dawn (and at dusk too actually) can totally change. In the winter time that effect seems even more so. 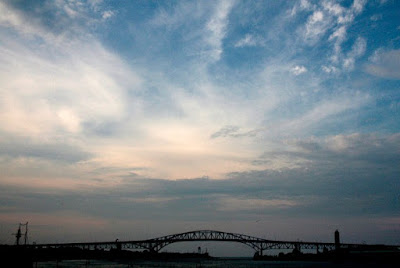 As an added bonus Blue Water Bridge picture here's on of it from this past summer about 10 minutes before a major thunderstorm rolled in.
I have been asked by people in the past if I have considered making prints of some of the photo's I have taken and sell them or let them be used for commercial purposes. With the economy being as tight as it is (especially in this area) and always having use for some extra income to provide for my family as well helping with my school expenses-the answer is yes. Those interested in such things can contact me at this email address
Posted by Dale Merrill No comments:

Now that punk rock has been around for 35 years (using 1977 as years zero though I know we could split hairs about it all day of when the technical start of it actually was) there's lots of wells that have been tapped.

Some of them have been sucked dry while others are still flowing for a band to find hydration. From each well the water tastes different and it's always good to have variety.
Elements of the early Rough Trade-ish DIY aesthetics, especially the wonderfully inept plonk of the Desperate Bicycles, comes to mind. Combine that with a bit of the 90's blurring into the 00's garage punk blasts served up by English denizens such as the Real Losers amped-up yowl and Black Time's everything from 60's french films to the kitchen sink swing & clang this with a little bit of the trash-pop-art-screech of things like Times New Viking, this London UK band has found wells they like very much to a point where they not only take a sip from them but submerge their entire heads too.
Keyboard blurps that leave one debating whether that are awesome in their cheese or perfect in their obnoxiousness. The covered in fuzz guitar playing sounds it like was just learned to be played a few weeks ago, just found a third chord and has no intention of learning anymore because it has found it's bad attitude sweet spot and the drums believe the in the same ideas with a trash can tappity tap tap bash. Yelping "we have no time for harmonies-we just gotta say what we want and say it loud" girl/boy vocals top it all off.
Some of the ten songs here sound so agitated that they might not only rattle themselves, but tape player they're being played on, apart. All of them though have that making noise in the basement punk rock spirit that lives and yells in a world beyond mall stores and giganto marketing schemes.
https://www.facebook.com/pages/Radio-Slaps/181423821913129
Posted by Dale Merrill No comments:

There have been many a time when someone who is from a mild of weather climate has visited Michigan during the winter months and have asked "How do you deal with this?" "Well, there's sledding, ice skating, snowmobiling, making snowmen, going out and doing 360's on freshly snowed roads as long as the car has rear wheel drive. Also, lots and lots of beer, whatever is on TV and cursing the weather outside comes into play. That helps us deal with the snow shoveling, getting stuck in snowbanks an the months on end of grey skies. And besides, it helps us appreciate the nice weather, when it comes around again. Basically, we don't like either but we've learned to deal with it. It's not usual to put it in song though. Well, that is until fellow Michiganders, the Johnny Ill Band, did such with their newest out on the X! label
Opening with strummed guitar and Jonathan Richman punk rock nephew croon about not wanting to go outside because it's too cold and there's no sunlight-"In The Wintertime" then kicks into Swell Mapsian DIY downstroke chug. A twinkly toy piano adds accents that resemble how the snow sparkles at dawn after a super frigid evening. Sure, that always looks pretty but anyone who deals with it knows that doesn't necessarily mean the blanket of white stuff covering the ground is all soft and fluffy. It could also mean it's hard and crusty and has left patches of those son of bitches all over the streets known as black ice.
Yes, it is true-No one really likes the winter though some pretend they do. You can't play really baseball or have a picnic in the wintertime and have to wear boots and gloves and sometimes scarves. Johnny Ill isn't sugarcoating it. They're just plain and simple telling you how it really is.

The two tracks on the b-side, "Matt Larson" and "Doug Braun", are about two dudes they know from around town. The former hitting the Tyvek when they lock into a Wire groove. The latter is like that as well but splattered with a bit of wheezy, broken carnival calliope organ sounds.
http://johnnyill.com/
Posted by Dale Merrill No comments:

Chocolate Robots, Instant Party and Dorothy's Hazarai at the Roche 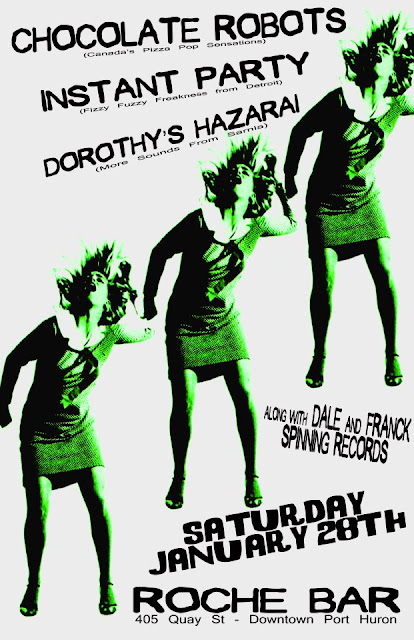 The Chocolate Robots (see S/T's review of their latest album here) haul their noisemakers across the Blue Water Bridge to entertain the people on Saturday January, 28th at the Roche Bar at 405 Quay Street in downtown Port Huron. Also on the bill the distorted destructo-pop grooves of Detroit's Instant Party and blues/folk-rock in a pressure cooker sounds of Sarnia's Dorothy's Hazarai. Yours truly along with Franck Nowak (and possibly some others) will be spinning records between bands. No cover, 21 & over and the show starts around 10pm. Hope to see ya there.
https://www.facebook.com/events/327220933966796/
Posted by Dale Merrill No comments: