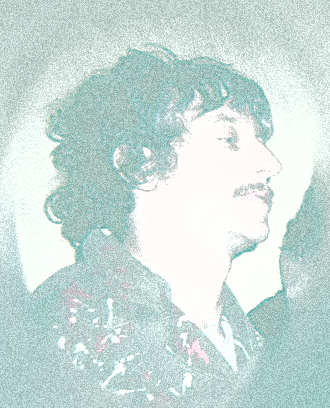 Do we need to discuss Andy Jordan's CV again? I'm sure most readers of Smashin' Transistors are at least familiar at least a couple of the things he's been involved with musically over the past decades. If you're not though, poking around here and a few other sites of similar taste and flavor makes for a fun game of connecting the dots.

This is the 2nd release (that I know of) that Andy has released under the sobriquet of Jackson Politick. The first, an LP titled Paste Vol 1, was like an excursion through a record collection of lively and multifarious selections. Even with only two songs on this slab, the same sort of experience is delivered.

With synth and electronical gurgles ala Eno's time in Roxy Music and space rock detouring into a land of playful new wave moves, "Psycho-mania" has a glitter bounce that would most likely make Phil Calvert bend an ear towards it and shout "Yes! Punk rockers adore rocketships" to any outer galaxy traveler around him during his time commandeering Quark, Strangeness and Charm model Hawkwind through neon glared celestial belts.

On the flip, "Well-adjusted Australians" is a bit more organic and earthly. Guitar strums twinkle like tiny lights on the water while a tiny machine taps out a pitter-patter beat. Along with Andy singing in a sleepy-eyed tone, things swirled together like a looking through the Television Personalities kaleidoscope after it's been smeared with petroleum jelly.

Get blotted at Market Square Records
Posted by Dale Merrill