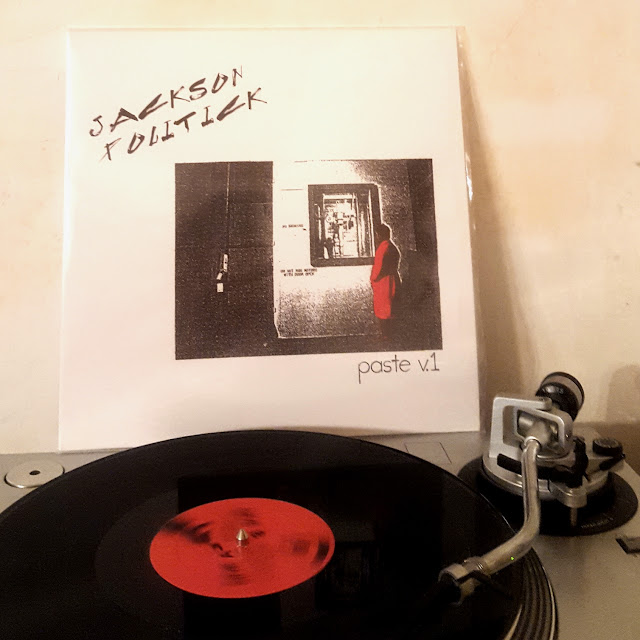 If Andy Jordan wasn't the hardest working person in punk rock for 2017, he still must be pretty high on the list of people who were. Doing duties in The World, Razz, the Beatniks and, of course being Mr. Human of the Reptoids, it's most likely didn't leave many blanks in his appointment book last year. And probably those open dates ended up having the name Jackson Politik quickly penciled in.

The thread that runs through all the different projects he's involved in is an admiration for pockets of sounds of yore but with enough of a twist to make it their own. This is like that too but as where the other ones seemed to focus on one particular sound, be it synth punk, budget powerpop or what have you, here things are more like a compilation of many DIY 45's all recorded on the same 4-track tape machine.

Scummy punk rock comes in the form of the skittish & frenzied on the album's opener "Habit", how "Learning To Live With It" sounds like something like Swell Maps at their most wrung out, hungover and on the verge of veering off a cliff and the hyperactive drum machine and overall bugged out bounce that's "Sex & Pity."

"This Town" might get someone thinking power-pop at first but the robotic vocal throws the scent off that trail fairly quickly. It is picked back up though (along with an aroma of something like hot dogs at a carnival and strawberry Bubble Yum) with "Hooked On A Feeling (Arthur Lee Love Song)."


There's a big chiming C86 thing all over "I Get Carried Away" which this reporter can't really figure out whether it was deliberate or simply a happy accident of a barebones tape machine. The same sort of thought comes to mind a bit on in the black raincoat wearing but still not 100% goth yet not exactly sunny day either feeling of the album's closer "The Hours."

I've been diggin' many of the different projects Andy's been doing since first heard the Cuts debut single on, outta all labels, Lookout almost two decades ago. This Jackson Politik has become truly one of my favorite things that he has done.
Glue your ears at Neck Chop
California LP Neck Chop