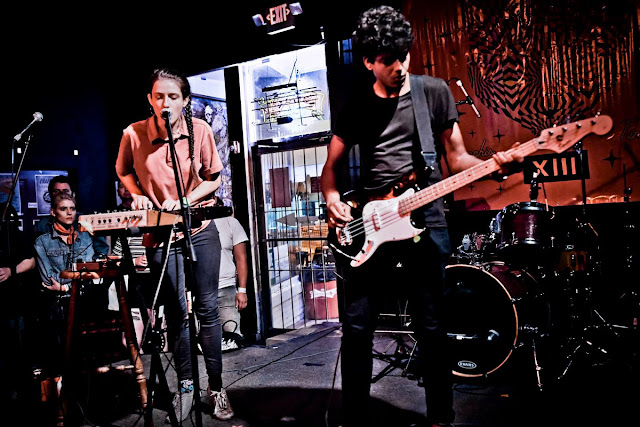 Sometimes when you hear about to musicians collaborating with each other, especially if their styles of music seem quite kindred, the sound of what it will sound like is already imagined in the head. When I first read that Seth of the Useless Eaters was doing a thing with Lise of Switzerland's Staches I figured it would be something a bit ansty in a somewhat trashy/most likely ratty garage rock way.
I was a bit off in my assumptions about I was about to hear. Minimal synths bloops and a fat poly drum snap teeter between a bouncy pop ditty and Rev/Vega bad trip on "Hostile Environment." Seth lays hypnotic bass rumbles behind and Lise's processed vocals sound like a robot that got programmed to show emotions but the only two that it uses are frustration and alienation. On the flip "Morphée" it seems that the machines have now seem come also understand anxiety and paranoia. The beat is jittery, the noises harsher and the fast swirling induces an effect that is similar to having vertigo and falling down into a spiral painted bottomless pit.
www.goner-records.com
7inch Goner