Wednesday Photo by Dale: Bloodshot Bill at the Roche in Port Huron 10/20/12

November 14, 2012
It's been a good long while since I declared myself "so over the one man band thing." Though some of their individual set ups maybe in interesting and I am not one to know clever ingenuity there have been so many for so many years now where they seem all seem to blur together. A little bit of of country and a little bit of rock-n-roll.
"Yeah, sure dude. I like dig the sound too but you all are starting to sound the same. Someone has gotta kick it in the face and make it sound all battered, bloody and LOUD y'know. Wearing overalls and straw hat does not equate that. And all stop doing the same damn Johnny Cash cover too" is what I want to tell most of them (though I know they probably wouldn't listen as I have a rep for being a not easily entertained smart ass when it comes to getting out of the house, going on down to the bar, spending money on beer and watching a band).
It seems that Montreal, Quebec's Bloodshot Bill may think the same thing! 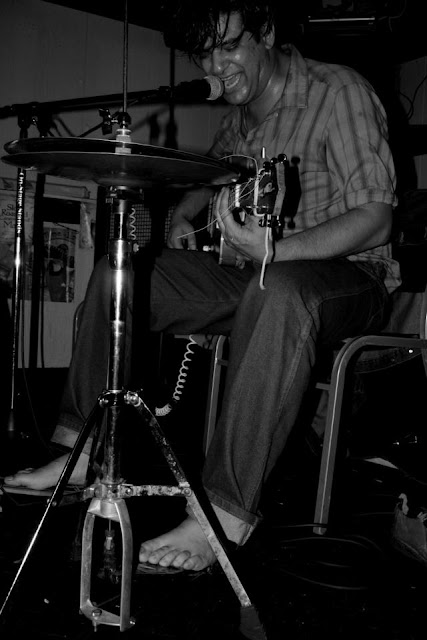 Save for one track I had heard in passing by the Tandoori Nights, a project was in with King Khan, I wasn't really familiar with any of Bloodshot Bill's music. Joining him and area boozy bluesy blues cat, Dale Beavers, for a bite to eat at Port Huron's Fuel Woodfire Grill the afternoon of the show, still didn't give me a hint as to what was in store for the evening either. Bill was soft spoken, personable and usually smiling. Not to forget to mention he has great hair too. 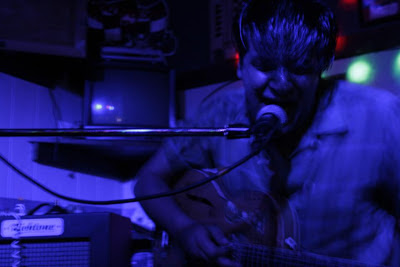 When a barefooted Bloodshot Bill sat down at his kit, a potted plant pilfered from the outdoor smoking area behind the Roche to hold it in place, plugged in his guitar and greeted the people, some dressed in Zombie gear as it was Port Huron's annual Zombie Pub Crawl that evening, I still wasn't expecting much other than some rote Rock-a-Billy riffs and songs about '57 Chevy's with Dodge motors in them (Heh, That particular tale being another story for another day though).
I learned that my expectations were way off! 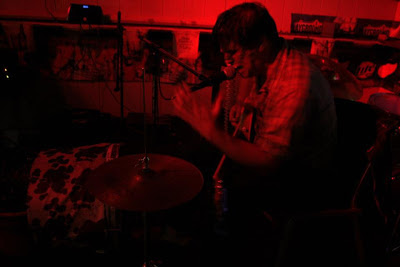 Within moments of starting his set his hair was flying and sweat was dripping. Hootin' and Hollering! Bashin' and Bangin'! Sure it was that 50's based thing but it was like the 50's if the aliens actually did invade and blobs of nuclear mutations were terrorizing random generic Midwestern towns and only the wild-eyed and crazy would survive.
Bill wailed like Gene, grunted like Hasil and sounded as lecherous as Lux! Sometimes all in the same breath!
People danced. People fell down. People had a good time. Rock-n-roll in this small town I call home can sure be a blast and this was one of them. Bloodshot Bill may have not sold me on diving back into the miles and miles of One Man Band projects that flood the internet and the dive bars of this country-but I will never doubt his prowess of knocking the crap out it and making it spit fireballs.
http://www.bloodshotbill.com/