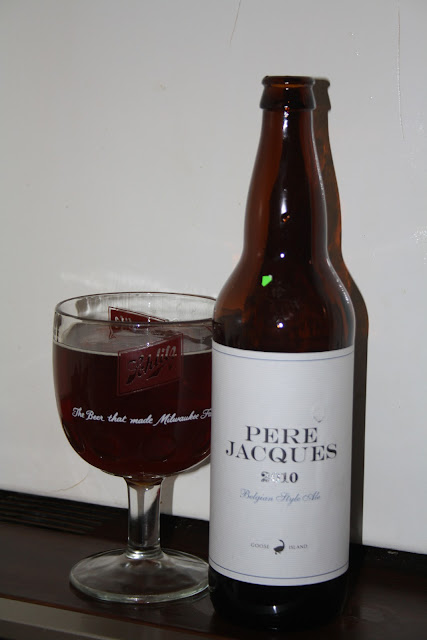 The first couple of Goose Island brews I tried a couple years back left me unimpressed so I laid off trying any of their other things til about a year ago when Jordan of the Mystery Girls brought over some of their saison take, Sofie, for me to try last spring. I liked it quite well and have intended on trying some of their other takes on Belgium styles but with so many other things and brews taking precedent it wasn't until tonight that I've really had a chance until tonight.
Rich ruby with gold highlights in color with a slight head that fades fairly quickly. Lots of warm dark fruits such as black cherry and raisin up front in the scent which are then followed by LOTS of caramel malts and bready yeast notes. Quite a few different nuances come out in in the flavor. Up front it has a cherry tartness along with some dates, peaches and a bit of woodsiness, towards the middle it takes on some green apple and grape nuances then towards the end a bit of cinnamon along with a touch of maple syrup. There's a bit of warmth to the end but nothing to really make one think it's over the 8% abv it sports.
None of the flavors are overbearing which makes all of it's complexities understated and interesting while working well and in tandem with each other. I'm kinda bummed I only have one bottle of this at the moment because I wouldn't mind having another as I could sip on this all evening.
http://www.gooseisland.com/
Beer Dubbel Goose Island Illinois

Sanilac Brew Head said…
Whats up with the Goose Islands just saying Belgium style ale but not explaining what style of Belgium it is?
March 9, 2011 at 4:07 PM