SPRAY PAINT Into The Country LP 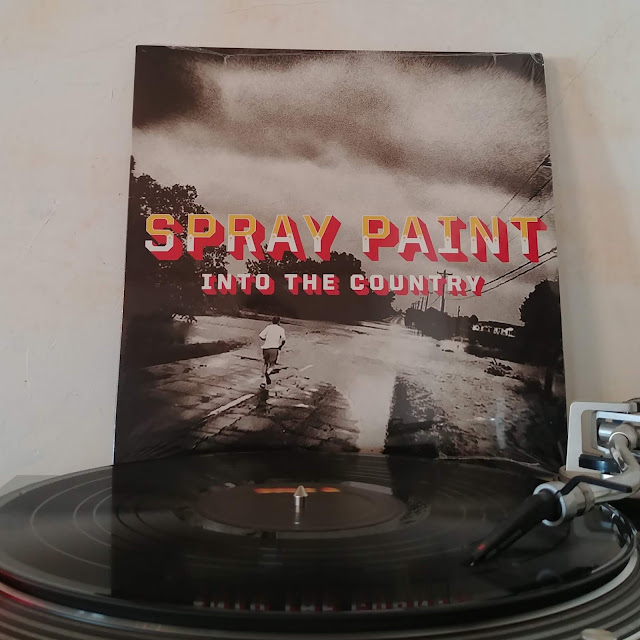 The intention has been to sit down and disseminate impressions of the Spray Paint album for a bit of a spell now. Whenever attempted though, this reporter finds himself getting antsy, agitated and itchy. I do believe that has been an intention of the band since their inception and they've continued to achieve it quite well seven albums deep.

A difference with their latest, Into The Country, though is that it sounds as if they've almost found away to almost to use their spasmodic motions and sways for ways to have a bit of sick fun rather than just simply abetting in aberrant thoughts of a listener.

To an extent, that is.

The spring coiled and furious pulse of "Alcohol Surface" opens the record sounding like krautrock in a bouncy house. That someone died a violent death in.


And from there, things get more deviant.

"Keep On Googlin'" is like the reverberated sound glitch that rattles around inside a human brain that has stopped completely stopped deciphering what is fact and what is bogus, leaving all thought to be decided what comes of fits in some kook curated web search. "Death Bed" could very well resemble sounds of aggrieved calm some may hear before exited this plane.


If the taunting of impending doom by mocking it and laughing in its face hasn't become more pronounced as the record progresses, the sentiment seems more than obvious as the record ends with "Can't Help But Kill" and "Cleaning The Gun." The former with a chunk of hillbilly flesh being run through a grinder located deep in a cave guitar lick and a used car salesman meets crazy old biblical looking dude pontificating in front of the post office rant. The latter for first giving an impression of floating in some weightless netherworld and then decompression sickness kicking in.


If you would like to toss some coin Smashin' Transistors way to help defray our costs, we gladly accept tips and patrons!