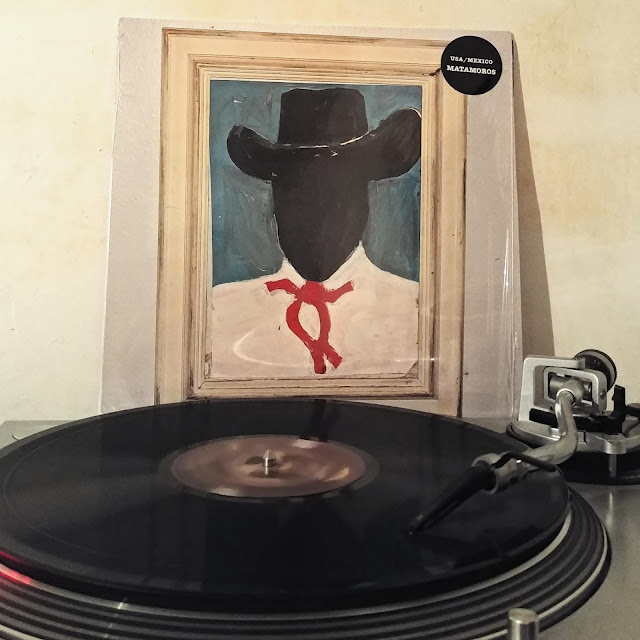 Sometimes I entertain the idea of taking psychedelic mushrooms for the first time in decades. Then I start to wonder “but what if I take the trip and don’t end up returning.” As my thoughts keep pondering the subject I then ask myself "And what if it's a really bad trip on top of that."

In my youth, I often wondered this while listening to the Butthole Surfers. USA/Mexico's begetter of nepenthean beats is Butthole Surfers drummer King Coffey. Along with Shit and Shine’s Craig Clouse on guitar and vocals and When Dinosaurs Ruled The Earth's Nate Cross on bass, the noise/drone/destructo-psych pedigree is of momentous scale. Joined by Spray Paint's George Dishner on 2nd guitar for the album's opener/title track, the brain fry may seem immediate with squalls of guitar feedback being the first thing to rise from the wax, but it's the rumble akin to listening to an old skyscraper crumbling to the ground after detonation played at a really slow speed where the hallucinatory trepidity really sink in.


It's followed by a reflective and nostalgic moment of sorts with "Shoofly." The "of sorts" is that the song originally appeared on Cherubs debut album Icing which was released on King Coffey's label, Trance Syndicate, in 1992. Joined by Cherubs member Kevin Whitley, this almost three-decade later take of the song somehow almost manages to outsick the original, and making it just as creepy and menacing.


While any given track on the album would make my grandfather come into the room, asked me if I am listening "to the soundtrack for World War III" and tell me turn it down, it's the 17 minutes of blown out rumblings and snail pace thudding of the album's closer "Anxious Whitey" that, if he were still alive, that would make him storm in, rip the needle off the record and whip it out the nearest closest window (just like he did the first time I played Throbbing Gristle's "We Hate You (Little Girls)" single on his fancy assed high-end Marantz at full blast decades ago.)
Crumble the walls at 12XU