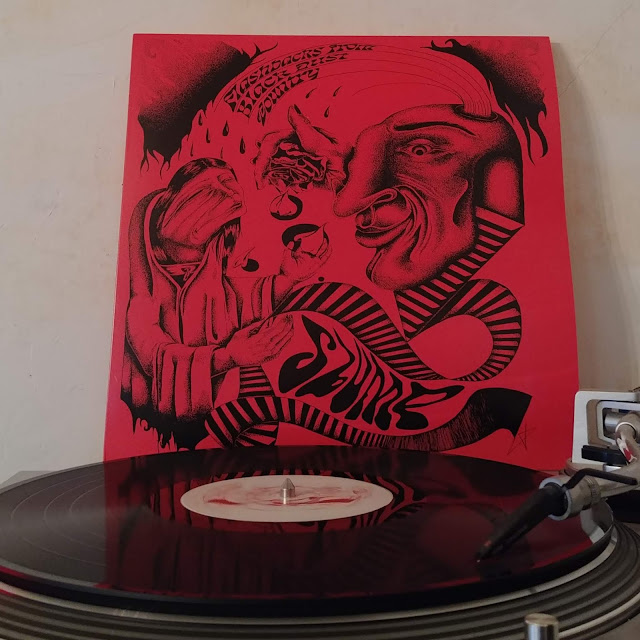 In the most recent Smashin' Transistors podcast I make a mention about coming home from work, putting a record on, turning it up loud and stepping out to my yard for a moment which led to my old biker neighbor walking over to me and wanting to strike up a conversation with me about the dangers of really hard drugs.

Now, my neighbor strikes up conversations with me semi often. They're usually about how he loves Bud Light in a bottle, how much higher he can lift his truck up and still keep it street legal and how the area's classic rock station needs to play Montrose's "Bad Motor Scooter" more often (and I gotta say I agree with that at least.) I think what inspired him to strike up this particular conversation though was because of the record he could hear seeping out the windows of my house. That record was Flashbacks from Black Dust Country, the debut LP from Richmond, Virginia's Slump.

The universe which modern "psych-punk" resides is can be a tricky one to navigate. For every combo that does the aural brain warp splendidly and twisted there's way many more that seem to be simulating a freak trip that they've got from 2nd hand tales instead of though personal experience, making the voyage a bit of a yawn. Such is not the case with this record though.

The immediate oscillations of the album's opening track, "No Utopia", is appropriately titled for these times as it's whirling is not of some floating and easy-going sort. There's more like zaps from a taser gun and as the song swells, the voltage increases, rendering body parts to go rigid or to flail in jerky and disturbing manners.


Beneath layers of echo, the vocals become another element of the auditory occurrences, but the sentiment burns bright like a fireball on "Desire Death Drifter" and the mood as obvious as a rust drill bit plunging at a methodologically crawl into the forehead like "Sensory Cocoon."


Because of the cosmic wanderings from gurgling Moogs, some driving, downstroked guitars and a thread of sinisterness that runs through every sound here, bandying around Hawkwind's name does pop up but Slump do not sound the types that would be all into having a crowd of hirsute stoners covered in body paint and doing some noodly, interpretive dance surrounding them. If the album's closer, the seven plus minute "Trip Sitter" gives a vibe that they'd rather douse them all in gasoline, throw a match and watch it all turn to ash while jettisoning themselves away from this planet.

Set fire to a hippie at Feel It Records