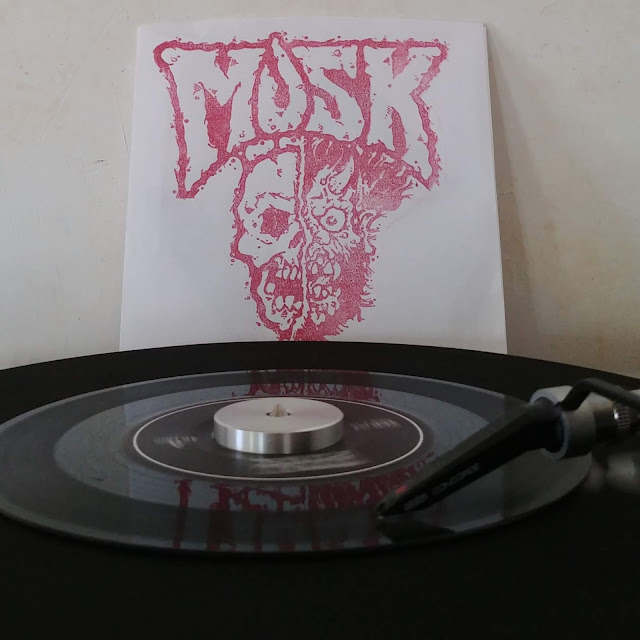 Whenever Musk is spotted under the light of the moon after surfacing from the toxic swamp they dwell, all other lunar hollerers cower. This latest thing from them, which following two full lengths LPs, is the first time the band has done a 7inch single.

The albums jockey the same sort of night creatures that bands such as the Birthday Party and the Scientists did. A decayed abnormality of an experience. A lot of suspense and mystery going on to balance out the generous servings of sonic gore.

For these two doses of toxins, the band has gone full on gratuitous slasher flick. There's an Unsane perturbation all over "Animal Husbandry." The drums clobber savagely but still have a swing and the bass line that sounds like it's covered in drainage ditch soaked moss. Guitars whirl such beastly vibrations, the listener wonders if they're even guitars because they resemble 20 circular saws chewing through sheet metal all at once. A sermon of unglued howling steps out from the shadows, it's barking casts images even more grisly than first imagined.


On the flip "The Floor" works up a trash culture voodoo grunt that is an extention of what just might have caused permanent hearing loss from the A-side. Here though it comes with a huge glop of whatever may have been oozing from sores which appeared after spending a gruesome night at the Stooges Fun House.

Greet the excrete at Total Punk


If you would like to toss a few bucks Smashin' Transistors way to help defray our costs, we gladly accept tips and patrons!