The COWBOYS The Bottom Of A Rotten Flower LP 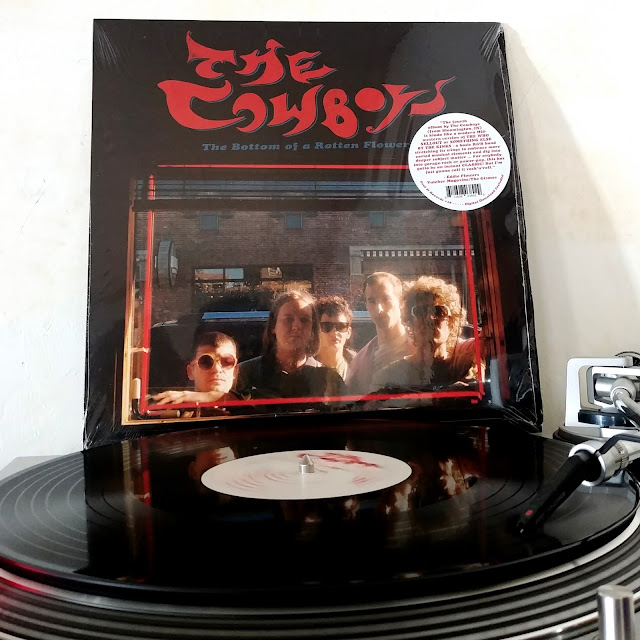 Some albums win you over immediately. There are also that take a bit of absorbing before their goodness is fully realized. Then those rare birds that have both going on. They knock you over on their first spin and each and every one after that, more and more they become even better.

The latest LP from Indiana's Cowboys, The Bottom Of A Rotten Flower, is one of those kinds of records to me.

The candy-coated roar of songs like the album's opener "Open Sores" with its bop in Day-Glo beat, the clomp-clomp-clomp stomp of "The Second Shortcoming Of Christ" and how the anthemic chords of "Pie In My Eye" gets fist pumping in a celebration of triumphs of the forlorn are all akin to something like the Buzzcocks and Cheap Trick coiling around each other. They then form a pop serpent which strikes an infectious bite onto all that are curious.

Unlike vocals that are the dead poet obsessed bray of the former or often almost falsetto bluster of the latter though, singer Keith Harman delivers them in a way that is one part hayseed, one part hustler and a whole lots of heart.

If the band had stuck with this formula of cleverly crafted and concise songs (most of them run around no more than the two minute mark here), it would be a record full of charmers but its when they branch out from that proven winner formula where this record shines even brighter.

The vintage jangle and mood of "Take My Flower And Run" is like a Buddy Holly song chromed for the jet age (minus any of the trying too hard posing presented by so many 50's cosplayers), "Female Behavior Book" could very well be something from the Kinks Face To Face catapulted into the right now and the swirly new wave organs on "Some Things Never Change" should be playing on carousels at all fairs across the USA this summer.

Counterbalance it with flat out rockers like "Red-headed Girlfriend" and you may understand why I am already declaring this one of the definite best in a year that is still young.
Get pollinated at Feel It Records
Posted by Dale Merrill

Email ThisBlogThis!Share to TwitterShare to FacebookShare to Pinterest
Labels: Feel It, Indiana, LP