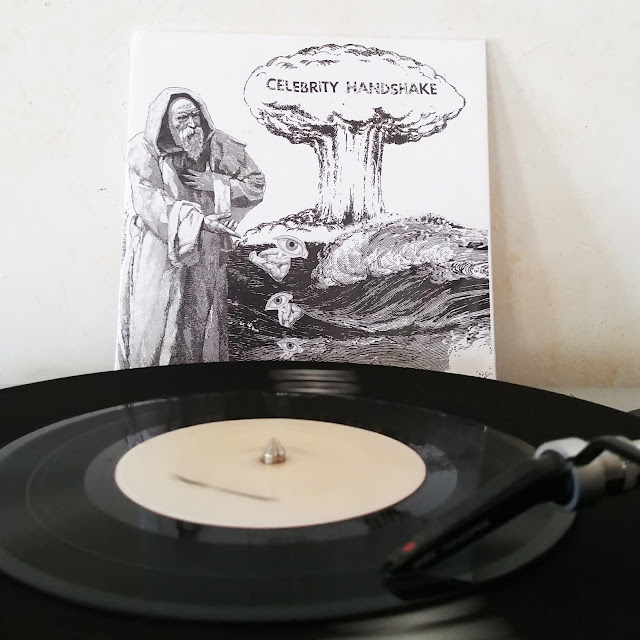 "Is this a musical equivalent of chewing on aluminum foil?"

It's a question that I've been asked about some of my musical choices occasionally for ages now. Often I answer "Yes. Some get electrified by such things. Perhaps I am one of them."

If the music then didn't make them want to get away from me after their failed attempt at a sick burn, my reply of how I get joy out some sorts of such sounds usually does.

If it was a Celebrity Handshake record spinning though, I doubt those types of folks would even bother to complain to me about such things. Probably because they would have already bolted out the door.

With an embankment of guitar bawl behind him, head Handshaker Aaron Haines launches into an unhinged and raw throated invocation that seems to want to disguise itself as an announcement from a civic minded person on "Political Future." In past times, hearing such a disturbed sounding rant would tank one's prospects in any sort of public office but, given the world we're currently in and the clowns that are in charge, its almost as if voting from is far from the worst idea a person could have.


It's the kind of song that makes the two other tracks on this record, "Hit Me Where It Hurts" and the featured recently on a Smashin' Transistors podcast "It Takes All Kinds Of Bones", sound downright normal. That is if you think drinking a gallon of gasoline to extol the virtues of rock-n-roll while sitting inside a beat up old station wagon that's about to get compacted by a car crusher is any sort of normal.

Get sweaty palms at Eastern Prawn.
Posted by Dale Merrill