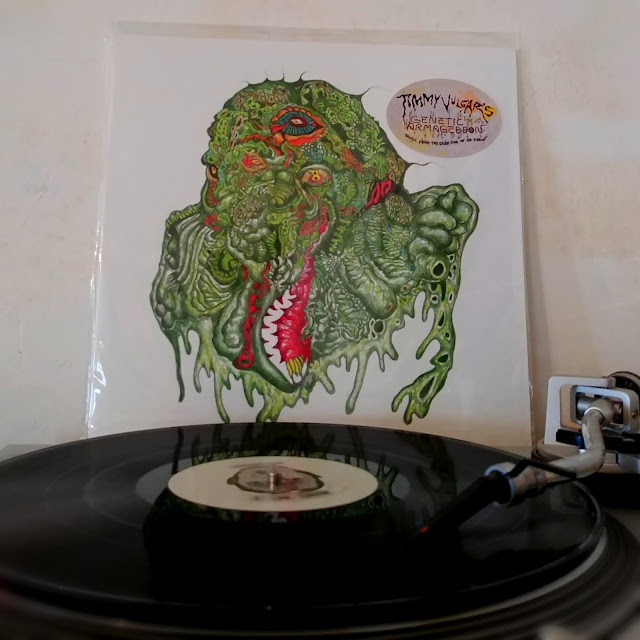 When it comes to attaching musical electrodes to the skull to administer the most proper of brain frying, Detroit's Tim Lampinen know where to place them across the temporal lines.

In most situations, he is usually abetted by other bent habitues anxious for a space trip but here he's all on his own. The result is still an excursion through galaxies squishy and green. Any keen observer of the music he's made up til now has probably noticed the trace amounts of space/krautrock that pumps through the musical veins but here it is the hemoglobin that provides the oxygen to all the vital tissues.

When dropping the "K" rock word though, the first thing that comes to mind to most hip to it is the motorik beat, right? Such a beat does exist on this record but often, like on songs such as wobbly "Chemical Imbalance", how "Suction Cup Hand" sounds like it is oozing from the floorboards of some cosmic biker clubhouse and the way "Fall Of Man" psychically jackhammers at the frontal lobe, if it is modeled after a heartbeat as Klaus Dinger is credited to saying at least once while scoffing the much-used pigeonhole of a term, it is modeled after an antsy and irregular one. It can definitely cause dizziness.


From many previous moments of records that Tim has been apart of expecting ladles of space puss to be generously served is completely understandable. And such things are delivered (with possibly some globs of early Cabaret Voltaire singles for flavor accents) on with "Walk On Glass."


It's the things not expected though like how "I'm Just Your Punk!" blares out like the most epic of pop songs through a million blown speakers, how "Burrito Job" resembles the Young Marble Giants on a really creepy carnival ride and weirdo underneath swamp water funk swirlings of "Catching Frogs" that make this record shine like some neon Canopus.

Taste the fungus at Total Punk
Posted by Dale Merrill