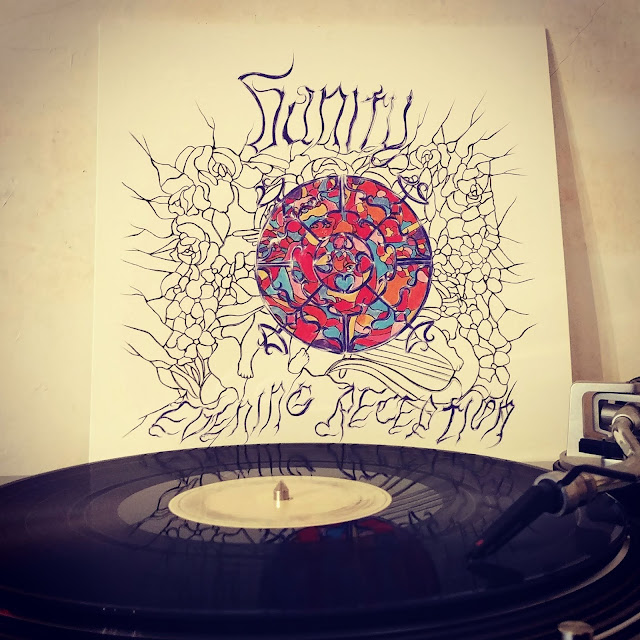 With a front cover looking like the outside of a death metal high school kid's notebook after the art class hippie got ahold of it, along with being on a label that is known for releasing hardcore punk records, I figured (without hearing any of the bands previous releases) that I may have a general impression of what this record may sound like just by at such artwork.

My impressions were way off. There are some things musically, if expressed as inspiration but not blatant cops, that'll always grab my ear and garner my full attention. Exile Stones, Neil with Crazy Horse, The Feelies Good Earth, Slay Tracks Pavement and Redd Kross at their pop glammy loudest are more than just a few of them.

This record from New York's Vanity rings all those bells at times. Often, several at the same time. The glitter splattered boogie and bending string blues swagger on "If You Must" and the way "Gimme Hyperbole" does a chugging downtown strut, reek of the bourbon soaked and chemical enhanced spirits of '72 era Keef but in a way as if it was all dropped in the middle of some early 90's DIY space where slacker jitteriness and tape hiss are imperative tools to communicate to one another.


Not finding the just city vibes rewarding enough, other songs here take on a ride out to the country. There's a rural bohemianism that's akin to lighting one up and watching the sunrise in a dewy field while stereo speakers that were placed in the windows blast in the short distance feeling on "Glad To Not." A same sort of mood is found on "World Gets Smaller" but much more stripped down.

To use a shopworn rock crit line, this record is packed with as many hooks as a well-stocked tackle box. If some of the tunes above don't attest to such things, and if the rockin' that pops and fizzes of songs "It's That Way For A Reason" and "You Can't Have Both" don't grab ya and make ya sway in some sorta way, I dunno what can be done for ya.