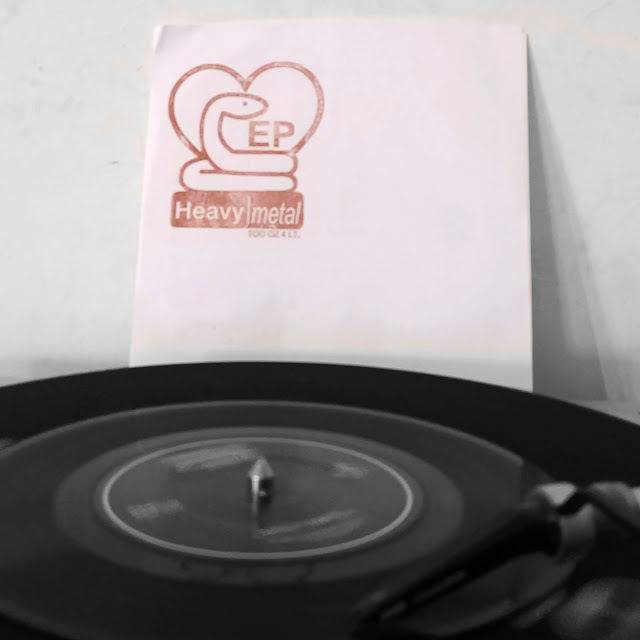 Up until now, Berlin's Heavy Metal have only served up their contorted and snotty explication of punk rock on full 12inch platters. Each of those records was like boarding an enclosed roller coaster. There are thrills inside but what sort will not be known until strapped in. The jolts and lashing movements are unpredictable and often manic. Then, before you even realized the length of the ride, it is over and it's time to hop back on and go for a spin again.

On their last album, 2017's LP3 aka The Nietzschean Supermen Of Dustbin Rock they made the claim that they were too sick for Total Punk. It seems that Total Punk took that as a challenge and did something to show the band what sick was (what they did I don't know. Given that the label is based in Florida and all know the stock jokes that go with being from there do any of us really want to know anyway) and got this tiny slab of audio pathosis in return for it.

"Underground Agent" opens the record by immediately shoving the listener down on the ground and then wildly whirling above them in a dance that's partially a pogo but seemingly more an addled tantrum. It's a sound that is stripped down to DIY basics but even with a simplicity of so few parts, it manages to be quite the entanglement. "Overtime" ups the leaping about ante' with a well oiled robotic drumbeat, gurgling basslines and a frenzied tirade for the working man.

If you've ever had a weird dream involving neon paint parties inside an active factory that operates on the fuels of doom, the outré new wave of "Gasmask Factory II" provides sullen adore as the soundtrack. "Schweinebastard" finishes off those left standing by equipping a matriarchal garage rock stomp with overjuiced laser guns and then splattering it with chimpanzee blood.

Catch the illness at Total Punk
Posted by Dale Merrill