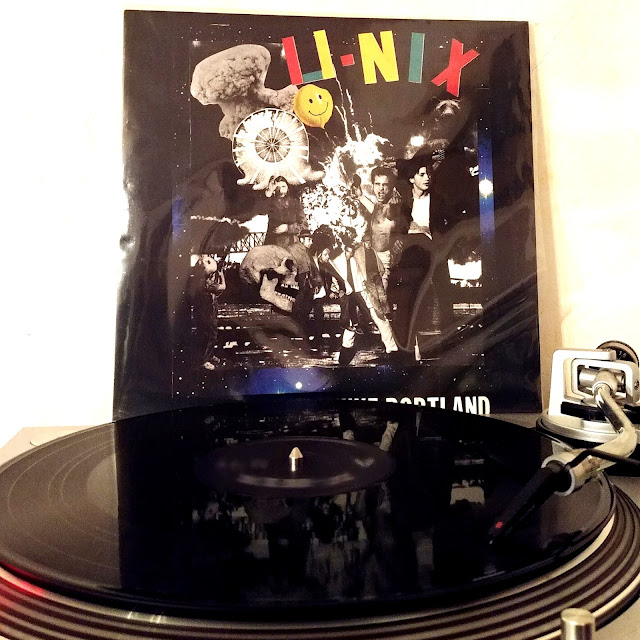 As I grow older and move a little slower (sounds like a corny country song, huh?) I find that sound as motivational fuel has become much more effective.

As a youngster, pretty much anything with a snappy tempo could fire me up for facing any day. Now being (as my chillun' call me when I am outside of earshot) grizzled, I need something with a bit more higher octane to help me blast off into another day of earning my paycheck.

Lately, the thing that I've been blasting a full volume before heading out the door each morning is this debut slab from Portland's U-Nix.

A whirlwind of raging hardcore blasts off every face within the reach of this record. Meant to be played at 45, some may find themselves doublechecking playing at that speed due to how berserk of a sound scene this slab rips at some moments. I, for one, thought I had the speed cranked to 78 even. Thing is though, my turntable doesn't offer that option. Slowing it down to 33 was interesting though as it then sounded like a sounder of swine way irritated that supper had still had not been served.

That is really here nor there though, right?

It's a sound galvanized by the lacerating guitar slashes from John formerly of NASA Space Universe. The record first drill its way up from some molten and enraged place in deep earth with "Landlord." Once it surfaces, the rhythm section rolls through like a tornado, battering everything it is path while a bedlamite orates acerbity for most things that surround it.

Consider it just a little prep test though, because it's followed by the longest track on the record. Sure, "Society's Victim II" still only clocks in at a minute and a half, but it's a minute and a half of dizzying jolts with an intricacy that causes just as many jaws dropping in awe as it does making people wanting to bash into each other.

You'll be glad that such prep was done too as the relentless fits of convulsions from a possessed surf riff on "Hobby" and the neck-snapping stops that happen on "Punitive" are not for an abecedarian sort.

It's a twisted and discomforting record and perhaps even framing it as a hardcore record is lazy. For instance, there's a way tracks like "Liberal Hardcore" are sharp needle jabs into the psyche and make basking in disorientation a most enjoyable way to spend fleeting moments.