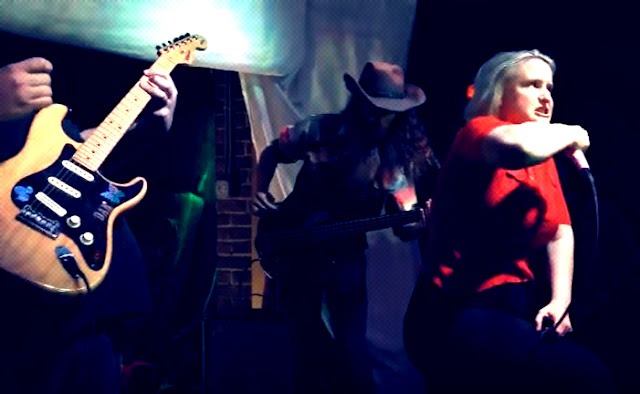 It is often said that it is better to go out with a bang than a whimper. In August of this year Oakland, CA's Violence Creeps played their final show and this single is their adieu to the world.

They didn't go out with a whimper. And calling this single a bang is not the right choice of words either. A torpid avalanche of bright and searing toxic sludge that engulfs everything in its path seems more apt here.

As often before, the band echoes a sludgy Flipper dirge but the occasional flourishes of melody and the random sounding bursts of avant-ism along with singer Amber's hoarse scorn of a voice, the sound resembles an ambush from all sides than it does getting run over by the slowest moving steamroller in the world.

They also didn't decide to play nice for a final salvo either. "Nephew Melting" calls out scene vampires with stupid mustaches and the privileged poser douches they do shots of Fernet with, pulling no punches in pointing out their backstabbing ways. Either that or it's about mini-MAGAt and 70's rock cosplayer Matthew Melton. Same difference.


The handclaps that start "Ford Go Bikes" had me waiting for an eroded version of Rolls Royce's "Car Wash" to kick in for a sec. Instead, it's something that one might declare having hints of Siouxie-core (if such a thing exists.) Lurching jangle, goth'd out reverberation and riddled with contempt. In its sights here is gentrification and the entitled class that is ripping the soul out parts of town and replacing it with some sort of free-range plastic accouterments.

Get broiled at Total Punk
Posted by Dale Merrill