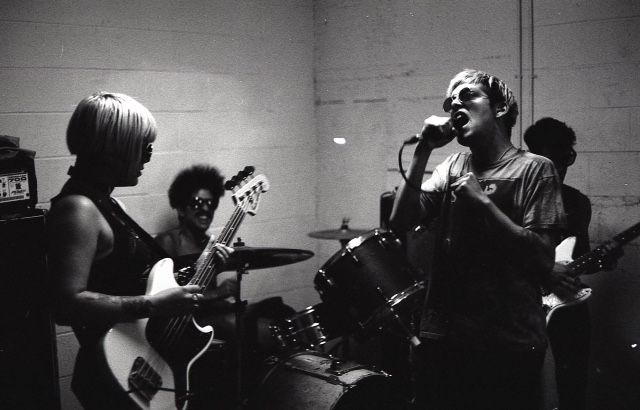 After a quick dalliance with the name L.I., Portland trenchant operatives scoff the risk of any cease & desist being landed on them and revert back to the name Lysol. Like the name brand of disinfectants they've chosen as their name, both rid germs away but the band does it with a heaping amount of scalding clangor instead of pernicious compounds.

Residing in an asteroid belt that's located between the triangular orbits of elastic punk, wooly garage rock and gangly hardcore, the sound is often dizzying and usually bumptious.

Akin to some proto-punk chugger shook up like a bottle of soda pop and then put on a sketchy looking carnival thrill ride, "Teenage Trance" makes a huge sticky mess when the cap is popped as it sprays, spit and spurts deliriously from front to back and side to side with wiry guitar clangs and a stuttering jackhammer rhythm.


"Chemical Reaction" isn't any calmer as it rattles and weaves with something that had me thinking "Hmmm, do I hear a surf chord there" as it started. It only took a second for that thought to be dashed when they were then answered with "Yeah, if cavepeople surfed on waves of fire."