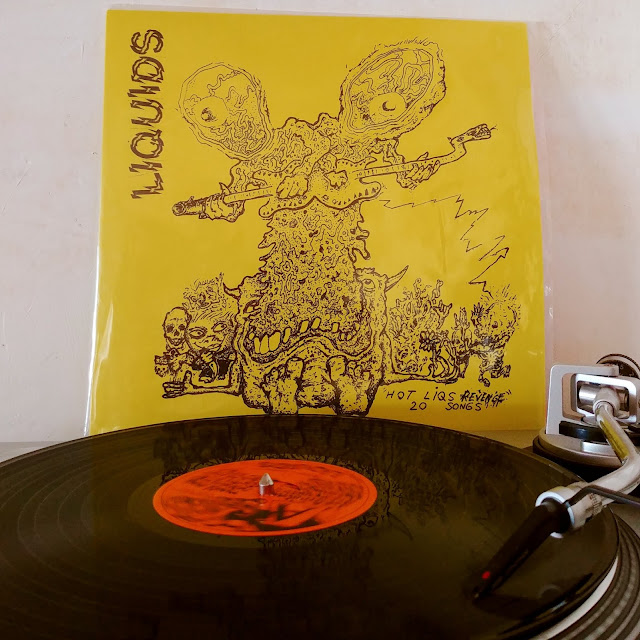 Upon the first couple listens of the album the thoughts of starting off this review by saying something like "cementing their scuffed up shoes in a place right between the most tattered and weirdest ends of early Midwest hardcore and the scorched pop of the Buzzcocks Another Music in a Different Kitchen, Indiana's Liquids...."

After a couple more listens I still felt my impressions of the record felt spot on to myself except for the "cemented" and the "place right between" part. Fronted by the Coneheads Mat Williams, it's more like the two aforementioned styles are not as much as an inspiration for the band's sound in as such things are simply instilled into their DNA.

Sure, the nasal wail in Mat voice does have an undeniable way of making people think Peter Shelly on especially on songs like "Wanna Throw Up (When I See Your Face)", "Talking On The Telephone",  and "Not Fun" but its a different kind of heat that is going on behind that voice.


It's not the warm blanket of rapid fuzz of ancient punk rock. It's much more prickly and itchy. Scratching at it is just gonna make it more raw and irritated which is probably the whole intent.

A same sort of attitude holds with the more "hardcore" leaning lobs of racket like the recording needle buried in the red burst of "Life Is Pain Idiot",  how "11 AM" sounds like it was deep fried in napalm and the grunt/stomp/grunt "Burnt Down Completely."


They're all blasts of pent of rage, but save for the later (which may even be a mocking ode to the tank top wearing, goatee sporting and fat "tough" guys who turned the sound into something to be heard in a gym rather than while riding a skateboard) have just as much in common with the Oblivians or the Gories than, say (for the sake of dropping an Indiana band in this review as a reference point), the Zero Boys.

With twenty songs on this record, it covers quite the trashy ends of the punk rock spectrum be it bashed up garage gunk or catchy hooks that use a contempt and an ire for squares as a catalyst. Hell, the record even kicks the shit of a Nick Lowe song. I like to think if he's heard the Liquids take on "Heart Of The City" he said "I never thought about it before but that's what the song needed."