CEMENT SHOES A Peace Product of the USA 7inch 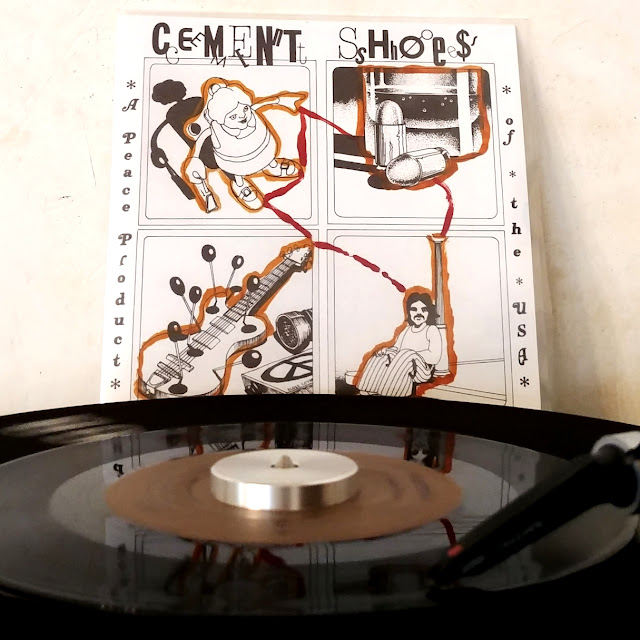 I don't know if there's some sort of pipeline that runs between upstate New York and the Virginia coast. If there is though, it is something miasmic flowing through. The band Brown Sugar were from the former and Fried Egg the latter. Both sounded as if they led first era hardcore down some knurled path of their own but both also then went and showed it where the LSD trees grow.

A dizzying thrash of velocity that wobbled as much as it stomped all slathered in a sonic sort of feedback, both managed to create something absorbing from what is often hackneyed and cliche. Malcontents from both groups co-conspire as Cement Shoes.

Sounding like an MC5 or Stooges riff whittled down a jagged shiv after a night of biting nails and dodging tweakers, "Fruity Funhouse" is all tangled like someone threw mile long strands of wet seaweed into the pit. A mist of green slime hangs in the air.

"I Saw The Devil Again (Last Night)" presses the pedal to the metal. A bit of speed metal perhaps but mostly in an elongated trip where the Dwarves Blood, Guts and Pussy oozes puss over some dark and forgotten Randy Holden riff while a landscape of a burning city passes by in a blur outside the window.