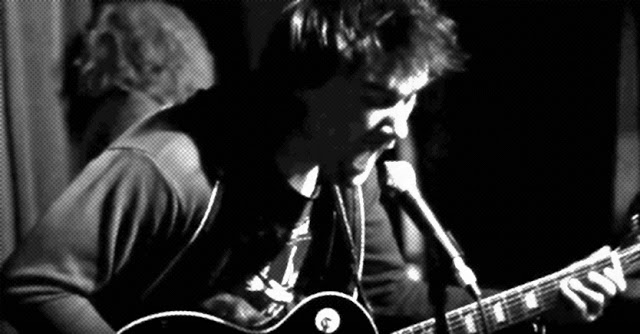 When I say that I don't mean that it is done in some fake swagger/look at my tattoos and watch me pretend to drink a whole 5th of bourbon kind of way. I mean more in the way like in the 70's when rock-n-roll was left for dead by most who then chose to listen to ELP or James Taylor. I'm talking more about the fiends scattered around the planet who cranked up their Stooges, MC5 and New York Dolls albums at full blast and then begat bands like the Pagans and the Dead Boys.

Now, I know there are bands out there claiming they are doing that right now, but plenty of them come off sounding and looking like the fake swagger thing I already mentioned.  Kid Chrome are not guilty of such things.

Guitars sound like their braying at the moon on "I've Had It." The lonely and desperate howl of them makes perfect sense when Chad starts hooting and hollering sounding somewhere between a wolfchild fathered by Lux Interior and an elementary school-aged Jay Reatard locked in his room with only a Mr. Microphone and a case of Jolt Cola to keep him company.


While that blast of lo-fi mind losing proves to be quite savage, a wall of noise grows to more obnoxious and bad-tempered heights when the record is flipped over. The ode to a budget brand of cigarettes, "Pall Mall 100s", is like being stuck in a hurricane of black lunged amplifier abuse and "Don't Walk" makes sure that you follow the orders it's commanding with a violently jerking and sloshing which makes it hard for anyone within an earshot to keep proper balance.