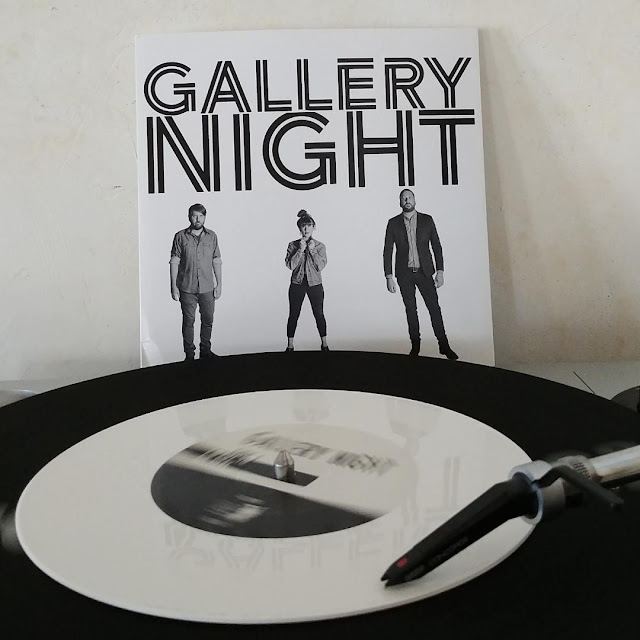 It's been a spell since we've heard some noise for ex Baseball Furies and Tyrades popinjay Jimmy Hollywood. Judging from what's going on with this latest combo, Gallery Night, it sounds as all that noise was kept pent up and poked with sticks until it was fully determined that it was all about to ignite from becoming such a caustic and volatile mixture.

Harkening to a heavy sound that trashed a few eardrums late 80's/early 90's (We're talking the AmRep thing here. Not Grunge.), thick, oily smoke seems to rise from the needle when the swirly pummel and negative demeanor of "I Want To Die Here" vibrates through the needle.

Pungent swamp gas seeps through every crack and crevice of "Young Love Doesn't Last." It flails in a disturbed contortion, giving the creeps to all that have witnessed it. Visions of the Scientists launching bombs in Unsane's direction come to mind. Just around the corner are Surgery and Vertigo drolling over a magazine with pictures of up north hunting adventures in it.

Disoriented with a head feeling it is feeling the effects of huffing bleach in search of some new kind of buzz, "Cruel Youth Story" is Gallery Night saying they want to take you for a ride. They aren't asking though, they are telling as they set the into a really rusted roller coaster car. Riddled with exposed jagged metal edges, it's then noticed there is no way to be strapped in as the chain drag ascends twisted rails. It's going to plummet hard and fast. The jerks, jumps and jostles of the ride has left most bloody, bruise and battered. For the rest, the fate was even worse.