RIK and the PIGS A Child's Gator Mini LP 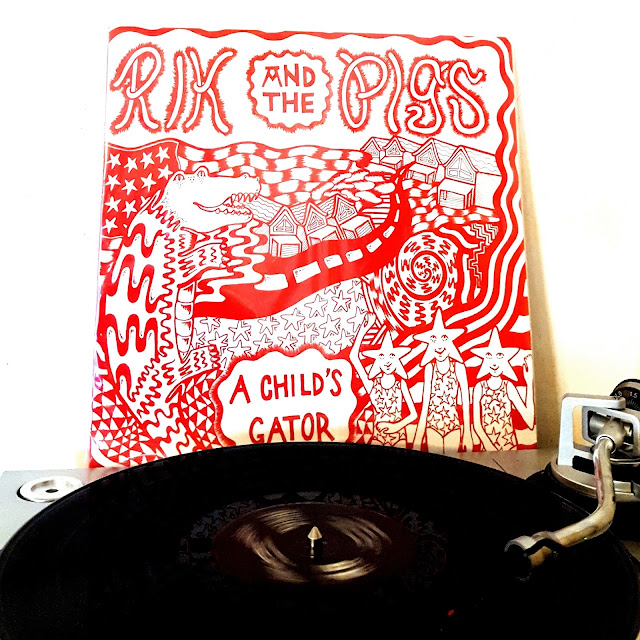 Some of the things that are missing from a lot of punk rock today is a sense of glitter and flash.

I'm not talking spangles and sparkles either. I'm talking that things like someone spraypainting themselves with a can of silver Rust-Oleum enamel for the sake of getting attention and then landing in the hospital in the morning due to the enamel clogging all their pores and causing some kind of blood poisoning. I'm talking a shiny sheen that comes from not only satin clothes but from intaking a lot of burgers & french fry grease and staying up so late from partying down that showering in the morning still hasn't entered the mind.

It's a glitz that has the opiated swagger of 1970's Iggy, the teenage cockiness of a video arcade hustler flim-flamming for coins by hawking pin doobies and the street knowledge of that one kid who always cuts class and chainsmokes Marlboro lights out in the woods behind the high school.

Maybe so many bands are lacking it is because Rik and the Pigs are hoarding it all that up for themselves. Sometimes dinging thoughts the Dead Boys if they all got their GED's, or the Jabbers if they washed their crotches at least every once in a while, A Child's Gator ruminates a world of shabby jeans and ringer tees, the drinking age being 18 years old (and all the cases of cheap beer that went with it) and whatever happened to real rock-n-roll.

While celebrating such things Rik celebrates himself for who he is and why he is so cool (and the band referencing a riff that reminds this reporter of Thin Lizzy's "Wild One") with"(Baby) I'm Electric" and extols the coolness of people he knows on "Donny Says". There's also a call out to this nation we all here live in too and a shooting of a wild surf that's happening in a gutter on a sketchy part of town.

There's even a moment here where the band throws back to themselves by updating "Don't Tell On Me" from the Total Punk single that came out in early '17. As it was, the song had the makings of a classic glam-punk jammer, so how could they improve on it? By giving it a heavier pair of boots to stomp with, a bigger guitar solo and a fresh sheen of snot.


A rockologist I know swears that with the phasing out of leaded gas, with it went a chemical that helped people strut the right of kinda slimy way. On this record though, it sounds as if Rik and the Pigs live downwind of a mountain full of Monte Carlos and Chevelles running their engines.
Get chomped at Total Punk
Posted by Dale Merrill