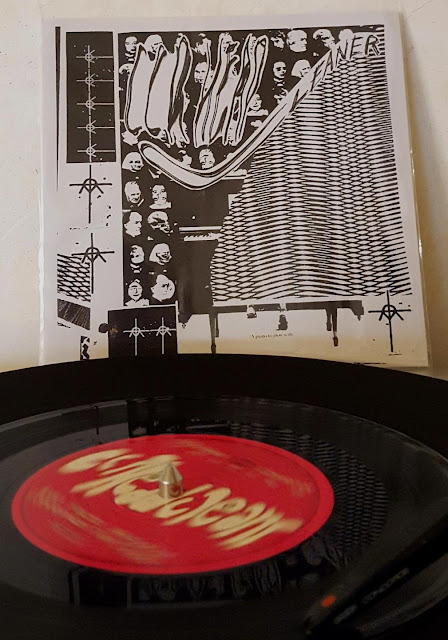 CCR Headcleaner is BACK! Not that they may have gone away or anything but after digging what they dealt for a bit and then not feeling all too much of a buzz with that album they did for In The Red in 2016, I wasn't too sure whether I'd come back around again to check out their stash.

Whatever caused that record to fizzle like a sparkler instead of exploding like a brick of M-80's has been fixed here. "Mission Control" blasts straight off the earth like a rocket built from a million Harley Panhead motors and straight to into a black smoked galaxy. It lands on a planet inhabited by psychomotor stimulanted space critters who are building a race of Black Sabbath/Helios Creed supermonsters. Upon meeting the crew though, the planet bows to their feet for already achieving the plan.

Like Godzilla sleeping in a frozen underwater world who is then angrily awoken forced to come to the surface again, "Unified" starts like it is shaded with dark hues of blue and green before making a ruckus and turning the whole city a flaming red. It's a quiet, loud, quiet, loud thing but it doesn't sound like it was lifted from the Scorpions "No One Like You" or whatever Pixies song Nirvana got the idea from. It's more like they watched a chain of electrical grid burst a series of blinding light and took it from there.

On the flipside, "Ipso Facto Alcohol" it's like they're trying to figure out jazz math but decide it's just too brain-wracking. The result of a stumbly creepy crawl through the land of the Magic Band where they meet a creature feature movie host with a deep penchant for quaaludes.

By the time the record makes re-entry to this world with a sizzled sonic boom and the infinite echo of "Lobotomize The Cops" you brain and eardrums may have already been destroyed by an asteroid.

When this record arrived in my mailbox, the envelope was shrinkwrapped in plastic. The mailer had a bunch of wet stains all over it. I'd like to think that the band soaked it in marijuana tincture and it was not just a foul up from the USPS.
Get fried here
7inch EP California Pollen Season

Anonymous said…
Strongly, strongly disagree re: the LP. I thought it was tremendous.