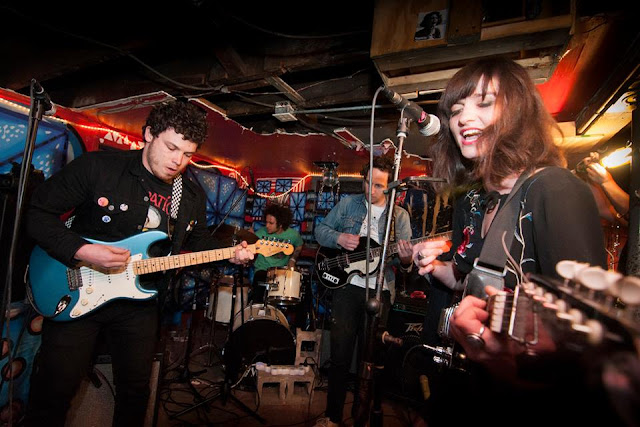 In the last decade or so, a lot of what's been passed off as "straight-up garage rock action" has been questionable to being downright discourteous to anyone who in the 1990's blasted the latest new releases from a decent record stores 7inch bin at full volume.

How many times over the past 10 years now have I've read some hype and expected to get wowed by hipshakin' coup de mâitre only to hear something timid and lacking guts? Quite a few. How many times have I said "More like feeble bedroom pop encased in digital reverb?" before banishing a band from my orbit? Just as many.

Chicago's American Breakfast isn't playing such a bait and switch games though. First off there's the way French-born Laure Ellie sings. It's part Ye-Ye girl about town sass and coo's, part greasy and rowdy Rhythm-n-Blues blaring. A sweet creme brulee chased with a shot of single barrel bourbon. The band is no slouch either giving a hot and bothered wallop that's made to be heard loud in dive bars (and not just over laptop speakers) to tried-n-true 3 chord rave-up sounds like "Asscube" and blues-punk oozing "Ice Cream."

Though American Breakfast have released a couple things before, this is their debut to vinyl. Seems like a minor wrong in the world has now be righted.
Smell the bacon frying at Randy Records
7inch Illinois Randy