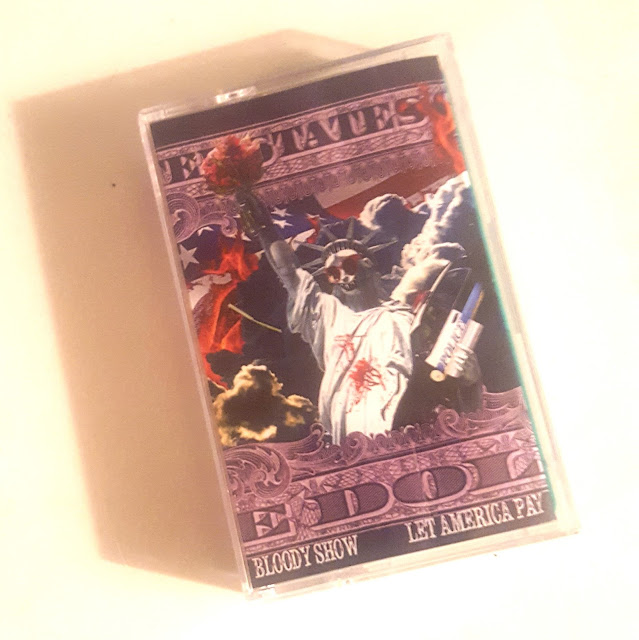 That's the first impression when holding the new Bloody Show cassette in my hand. From sleeve design which has to be an homage to the Funkadelic album of that name to the title of this thing itself, would be simple enough to think that. The sounds stuck to the magnetic tape here solidify those first impressions too. Not in so much that this is a freaky funk record (this is much more on the hard rockin' side of American proto-punk clobber that psychedelic booty shakin') but in a way that is a statement of how this nation is taken some way wrong turns again and a small group of creeps, assholes and full-on racists are steering the ship.

The Staccato punches that "Open Fire" throws convey the anger towards asshole cops and the revenge wished upon, while it's swirly grind is like the brain swimming from seeing red because of the much understood rage. A similar vibe fuels the grind on songs like "Trash" and "Red Penny." The former is like an aural version of bare skin wiping out at high speed and skidding yards down a gravel road. The latter a more slow-motion version of the same.

While most of the songs are caustic and deleterious to anyone with a positive attitude or viewing the world through rose-colored glasses, there's an almost rural Neil & Crazy Horse going on "Psychic Witch." I doubt though any braless, granny dress earth mama would appreciate the sentiment though. The sonic growl of it would be enough to make them hide under their pile of moldy and cat piss smelling David Crosby records.

"DUI" barreling drive has a great highway song thing going on but the circumstances that entail are just one of the reasons that the song probably won't appear on any road songs CD you'd pick up at a truck stop.


I've said it before and I'll say it again to every dimwit who made the claim "Well, one thing Trump will do is make punk rock good again." And that is "Fuck off." It's cats like Bloody Show's Jah Nada, who has more of a reason to be fed up than your coffee house philosophies and memes ever will. And he's been making punk rock for a good long time now.
Become part of the bloodshed over on Facebook
Posted by Dale Merrill