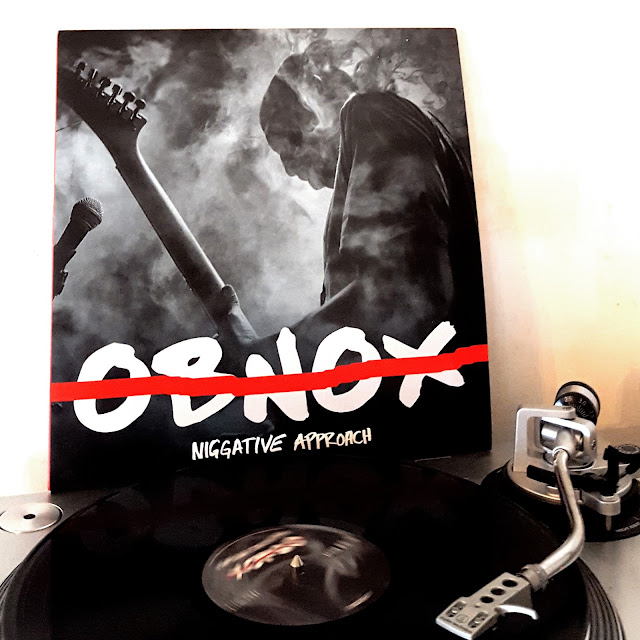 It probably took about ten minutes after Lamont Thomas landed the first 'Nox recording on folks ears before they started bandying the buzzwords SOUL & PUNK around.

The punk rock thing is a given. Lamont's background of being in brash and blaring 100% no bullshit rock-n-roll music bands goes back a couple decades now. Usual known for his way around a drumkit in those combos, him front and center on guitar, vox and mostly everything else at least occasionally in Obnox is a whole new kind of volume blasting monster. It's serrated and searing. It's the sound of jet engines being piped through a bong. It's heavy, it's hissy and it not also clobbers, it stings for days after making contact.

The soul end of comes from the street level words and blazed out attitude he always lays down on 'Nox records. It also comes from him being a guy that dissertate not only about the finest moments of many a 1990's garage punk band, but can also, for example, can extol about Art Blakey's finest moments or how Prince made music better for everyone for hours if the conversation calls for such a thing.

While this writer has had just as many first impressions of Obnox records as they've had releases now (and with eight LP's and nine singles under his belt in the past six years, there's been quite a few), this new one was instantly "It's like the Ohio Players getting dragged behind some really hardcore biker's hog." Another spot on description is one I saw on the web. My apologies to who said it because I can't find it right now to credit you for it but it was something to the effect of "It sounds like Curtis Mayfield but it's the sound of him committing suicide." It's funky but it isn't goofing around. It's got a groove but it has moves like the dancefloor is covered in broken glass and blood. It's the sound of America NOW! The sound that Trump tards don't want people to hear and the sound of the dolts who are going around saying "Punk Rock is gonna get better again now that Trump is president" probably won't hear because a) it's not going to have a big marketing budget or media buzz behind it selling it as some "revolutionary" and b) there's good punk rock coming out every day. If those folks knew THAT, they wouldn't even have made such a dumb statement in the first place.

The "soul" on this slab also is much bigger and perhaps even less obscured under the usual maelstrom of sonics that other Obnox offerings. Songs like "Carmen, I Love You" is practically a straight of love jam with the expected noise kept in tack and "Hardcore Matinee" is a love letter to the days of underage punk rocks told from someone who has a Roy Ayers Ubiquity track banging around in their brain.

The punk end of the game isn't neglected here though either. I mean, the record is kinds named in tribute after one of the unruliest and greatest American bands of all times (and even has the man John Brannon chiming in giving his blessing) and ear wax dislodgers like "Skywalker OG" attest to that.

If you're new to the Obnox game (which if you're a regular visitor to Smashin' Transistors I don't know if I should be more shocked than ashamed) Niggative Approach is a good place to start. For those already down but haven't grabbed this one yet, be ready for something a little more experimental (there are things here like "Afro Muffin" and "Audio Rot" that are in a Throbbing Gristle/Cabaret Voltaire region and million miles away from Garage Rock Land) and still have you brain smoked. Headphones optional but highly recommended.
Get it at 12XU
Posted by Dale Merrill