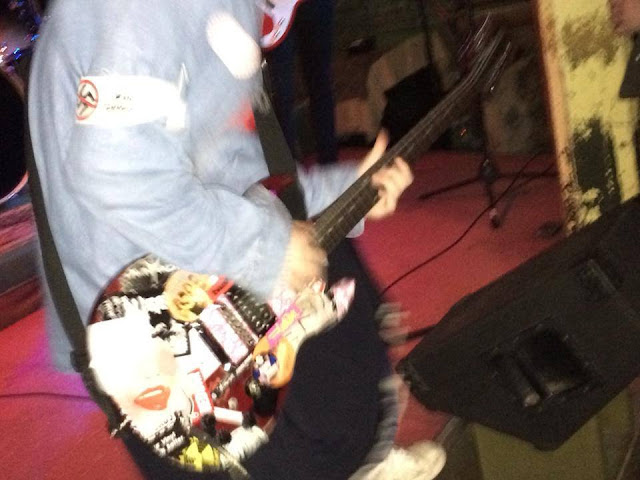 I feel like I got a severe case of whiplash after listening to this 4 song rager. Too arty and twisted to lump them into the New School of Old School Hardcore and maybe even too spazzed out and thrashy for some of the modern age synth punksters seem to be on every corner now, this outta Minneapolis clamorblabber inhabits some manic planet that inhabits the same sort of the creepy neighborhoods as the Coneheads (which, according to some internet tastemakers, they've gotten some joy out of trolling) and Lumpy & the Dumpers (Neo Neos commandant Connie Voltaire has even done his own take on their "classic" Huff My Sack.)

Their four songs on this record take that thing and make it even more agitated and jittery. All quick blasts of coniptions. Weird new wave gets smashed to bits and reassembled all wrong which makes it alright on "Puke Girl's Class" while something like "No Dancing" lives up to it's name as you probably the only kind of steps you can do it are some kind of whirling dervish that piss off some and really freak out the rest.


My ears are telling me that something happening on "Money Trash" involves something ripped off from Eddie Cochran's something else but really, is it robbery when you found in underneath a hairy pile of goo at a toxic waste dump site?

Get this sickness on record via It's Trash in Canada and other fine retails spots. Wallow even more into the Neo Neos disease at their Bandcamp page.
Posted by Dale Merrill