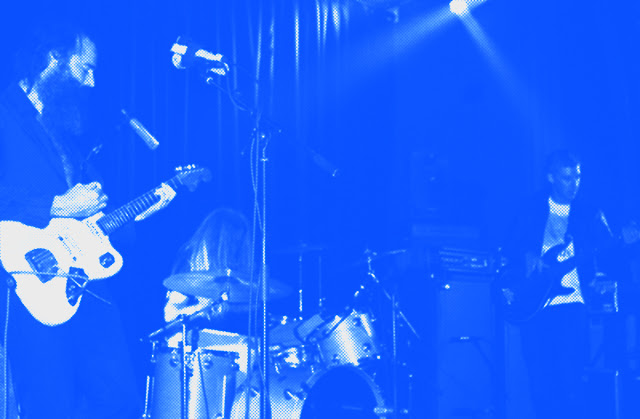 The first two Comets On Fire records were psych punk brain burners. As they progressed though, the freakouts calmed down and they sounded more like they were taking long walks in woods and looking at fireflies. When Comets main dude Ethan Miller formed his next band, Howlin' Rain it to my ears that things were gonna be even a bit more backwater in the aural zone.


Feral Ohms are Ethan's new thing. This harkens back to those early Comets On Fire records. As an power trio things are absolutely and straightfoward. The electrified howl of feedback that fries the eardrum when the needle drops on "Love Damage" is a warning that their ready attack and ravage.

The jams are kicked much more efficiently than what they could turn out to be in other Ethan projects too. None of them clock over three and half minutes. There ain't much time to noodle off on six string soliloquies in hopes they reach planets far away when you have a mission on earth. They want to come in, blow the place up and get out to get more on!

It's all done at a super high volume too because the vinyl is mastered loud in the correct way (and is made to be spun at 45rpms), something that seems to be a bit of a lost art. That high crank level makes things much more maximized and manic. Ya got things like "Living Junkyard" and "Value On The Street" giving the On Parole Motorhead an overhaul. That stuff was hammering but still had a hypnotic haze all over it but lacked a blast in the production to truly rocket it off. Here, that type of sound is nitro-charged and leaving a mile long trail of flames behind it.


I don't know if "Super Ape" is some sort of subliminal suggestion that everyone needs to listen to more Scratch and  the Upsetters records because it's too dang hard to hear over the type of blare King Kong's biker cousin would turn up to rally his troop on the Congo mountainside to get rowdy.

It's also really hard to decipher in Ethan's bellow whether "Teenage God Born To Die" is a cautionary tale, a fact of life or a command the band wishes more people would heed. I do feel that if you had a time machine and dropped a tape of the songs into the right people's El Camino's and Torino's, there would be lots of danger on the highway.

Since the cursed never seem to rest, this record keeps a relentless taste for splatter all the way through the end. It whips sticks of dynamite into a swamp of grunge 'til the most onery and festering scuzz is cackling with approval on "Early Man."

Ending the record with a tune titled "The Glow" may give hippies wishful thoughts that its gonna be a "mellow out final jam, maaan", but it more about spewing some type of toxic audio goo that'll make a person glow green like the would in Sci-Fi comics.

Yes, through and through,it sounds like an atom bomb being drop in a building that houses a marijuana grow operation.
Get the album here.
Posted by Dale Merrill