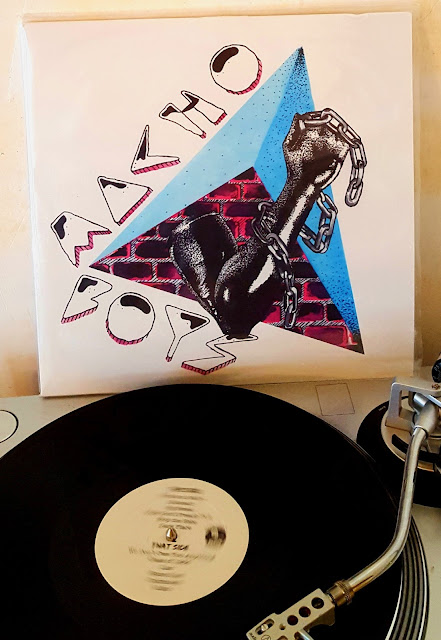 Three cats live in my house. A big calico called Clementine (but we all call her Puff) who doesn't really have time for humans as well as most other things in the world, The Ripperpotamus, a furry beast of a Norwegian forest cat who, if was a human, would most likely drive a customized van with something like a wolf wizard standing on top of a mountain made of medical marijuana and lighting a bong with a bolt of lightning as the mural on the side and a polydactyl tuxedo named Von Von that showed up in my garage a couple years ago as a kitten and has never left.

All three of them react to music in some form or another, but it's the tuxedo that seems to express it the most excitement for this, the debut album from Portland punk rockers Macho Boys. Seriously! I was playing records the other day and she was in a rare (for her) deep sleep on the windowsill. She was dead to the world and paying no mind to what music was playing. Then I dropped the needle on this. Her ears perked at the opening cymbal crashes of "Victim To Blame" and by the time singer Tekiah Elzey opened her throat up of to yowl over the breakneck din of grinding guitars and bass avalanches, the cat was zipping across the room at blinding speed.

Up the stairs then down them. Through the main floor of the house, down to the basement and back up again. She was practically bouncing off the walls. When she stopped it wasn't to wonder if a song like "Cockroach" was a metaphor for creepy humans or if it was about the actual insect, was I bummed out at "Dinosaur" because it might be ripping on oldsters and was the year I graduated high school, "The Class Of '84" as punk rock as the as movie a song on this album get it's title from (it wasn't, really...there were only just a couple of us actually), whether Madonna would have an opinion on a sequel of "Papa Don't Preach" which features a bloodstained buzzsaw, if "Slam" was a cover of the Onyx song (it's not by the way), or if pigs do sweat, does it smell like pork rinds. Nope, the only time she did stop was between each song and then she'd be a black & white blur blazing through the house.

The more I watched her the more I started thinking "Maybe she does understand every single thing that is going on here." I mean, when their ode to WWF Legend Stone Cold Steve Austin came on she started doing dives off the top of the couch and onto the floor like she was doing some cat version of the Stunner.
Get it at Neck Chop Records
LP Neck Chop Oregon