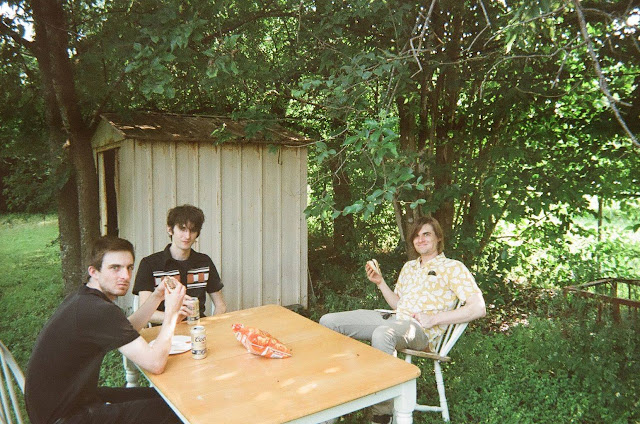 In a conversation I had with a friend recently we were thinking about which AmRep band we had each seen the most. For me, it was (the) Cows. I was then asked if remembered any of the bands they played with. I couldn't recall. Hell, I can't even recall any of the other things that happened on those evenings other than seeing the band. A Cows live show was like watching a gang of the criminally insane compose the soundtrack the Z-grade hayseed horror film where they do really messed up things in really weird smelling basement that is constantly playing in their heads.  It was always disturbing and mesmerizing. I think they did something to fry any other memories of the night out of the spectator's brains.

I have not seen ATX's Borzoi live so I cannot confirm if they have such powers on stage but on this record, they seem to have grazed through a same sort of hazardous waste meadow because they sound a similarly unsound. Thick bass slugs straight in the gut while guitar strings wrap around the throat. The drums, noticing the grasping and struggling, assist by kicking it all down the side of a mountain.

The EP's title track thrashes like a deadly barn stampede. Chickens get trampled. Goats bleed to death. At a little over a minute long though it's just a warning bell of the audio carnage ahead. The bandsaw on metal grating guitars on "Feeding The Pig-Dog" first create discomfort and tension. Just when you think it's about to drive you to the brink of mental capacities will never return, a jet engine hurricane of feedback blows through, with shards of glass and rusty nails flying around and stabbing everything in their path.

Don't think that just because they have a song called "Desert Rose" that it's going to be a pleasant and pretty picture either. It's more like some sub-human stomp that's like between something off the first Mordecai album and the noise that rings through a pile driver operator's head when deep into his work. "Millipede" is an apropos title as it is like a billion insect feet scattering over the psyche. Those insect feet aren't bare either. They're all wearing old metallic golf spikes.
Get it at 12xu.bigcartel.com
12xu 7in EP Texas